When I was a kid we had quite a few Disney movies on VHS, and we’d watch them over and over. But one sat on the shelf, untouched for years. It was Pinocchio and the thick layer of dust on the box stood as a testament to our disinterest in it. And to my mother’s dislike of dusting.

I just remember that it bored us all and we never warmed to it, so it sat there, unwatched. But as MWF and I have decided to work through the Classics I actually watched it for the first time in over twenty years.

I could vaguely remember a few parts- the Blue Fairy, Jiminy Cricket, the bit with the whale, something about a donkey and “I’ve Got No Strings”. Beyond that, nothing.

I can see why it bored me and my sisters, because it is incredibly weak. There’s no massively impressive villain or central thread that engrosses you, and the title character is annoying as hell.

Seriously, Pinocchio basically makes his way through the movie making terrible decisions and then whining about the consequences. All the way through he’s supposedly guided by Jiminy Cricket, his conscience, who does very little other than complain about what an idiot his charge is. 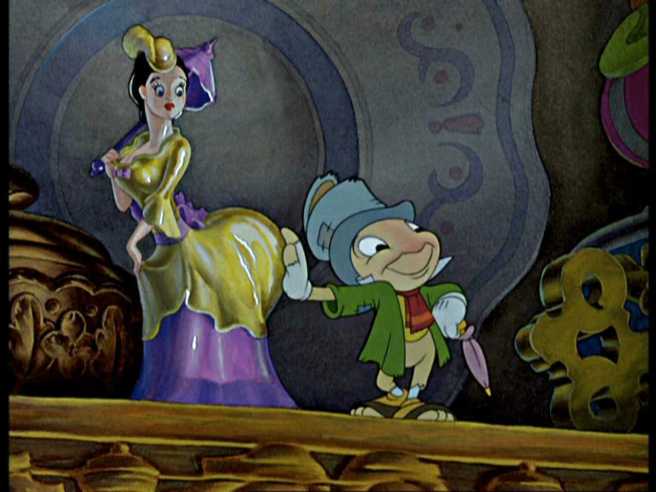 There are a couple of nice sight gags and moments of invention, but it’s hard going.

The plot is kinda episodic and it doesn’t quite work, he joins a stage show, escapes and decides to get home, is tricked into going to Pleasure Island where he becomes half donkey, escapes, goes home and then rescues Geppetto from a whale, dies and is then brought back as a real boy.

The problem is that every sequence feels disconnected and Pinocchio doesn’t grow, he just suddenly decides to find his dad. And like I said, he’s hard to like.

The most likeable character is Figaro, the non talking cat, which says something, and I found my attention wandering. It suffers from deficiencies in what I see as the key Disney ingredients; music, villains, comic relief and emotion. The songs aren’t particularly memorable, aside from “No Strings” none stays with you.

The art is good in some cases, but in others shows it’s age, particularly in the Blue Fairy and the human Pinocchio, who is surprisingly creepier than his puppet incarnation.

I think at it’s heart it comes down to the characters, none are developed that deeply and I didn’t find any of them particularly engaging. The villains are lacklustre, the hero irritating and the support shallow. Disney can make some great characters, but none of them are here.

Although it does include a swearword as one of the English accented characters clearly says “arse”.

Under 10 Chris didn’t like it, and neither does Over 30 Chris. An early shout for my least favourite Disney movie.