It’s always interesting watching old sci-fi movies and seeing how quickly they imagined we’d balls everything up. George Orwell thought that by 1984 we’d be living under a totalitarian regime, constantly observed. John Carpenter went for 1997 as the year by which New York had become a prison colony. Of course, some of the joy watching them now is knowing they got it wrong.

And unless Donald Trump really cocks things up, The Running Man will join that list of films set in a future time we’ve now lived through. In 1987 they thought we’d really make a hash of things and live in a dystopian hell where the vicious government keeps the populace brainwashed with violence and glamour on telly.

The film is based on a book by Stephen King (writing under the pseudonym Richard Bachman) and with all due respect to King, is far more entertaining, mainly because it was adapted to be a vehicle for Arnold Schwarzenegger who was at the height of his powers. This takes the bleak and grim novel and revamps it as an ’80s action movie.

Arnie plays, Ben Richards, a police pilot framed for the killing of unarmed civilians, despite the fact he was the one who objected and refused to follow his orders. Locked up on a working prison where they convicts are forced to wear exploding collars that stop them from leaving boundaries. I saw this movie as a kid, and the exploding collars are the thing that stuck with me the most.

He engineers an escape with rebellion members Laughlin and Weiss (Yaphet Kotto and Marvin J. McIntyre, respectively). They want to bring down the government and expose the brainwashing, while Richards wants to get the hell out of town and go into hiding. He plans to get his brother to help him but when he gets to his apartment finds that he has been taken for “reeducation” and that a new tenant is living there, musician Amber (Maria Conchita Alonso). Richards uses her to attempt to flee the country, but she blows his cover and he is arrested.

As a result he meets Richard Dawson’s Killian, the smarmy game show host who runs The Running Man, the world’s most popular TV show. Dawson is a fantastic villain, arrogant, scheming and utterly without compassion, all hidden behind a friendly, polished public image. A game show host himself, he captures the faux sincerity and interest, before revealing a stone cold side away from the cameras.

Also, in a brilliant moment he responds to Arnie’s trademark “I’ll be back” line with a simple “Only in a rerun”.

Killian wants Richards for the show in order to boost stagnant ratings. The show involves criminals having to run through a series of challenges, with the promise of a blissful tropical paradise should they succeed. Stopping them are the colourful, flamboyant and vicious Stalkers, who are a combination of ITV’s Gladiators and the OTT wrestling heels of the ’80s.

Each operates in a different section and attack Richards, Weiss and Laughlin. Amber is also thrown in with them as she starts to realize that the government has lied about things and is busted snooping.

Of course, every Stalker fails and Arnie dispatches them in short order. Each time with a quip ready to go- “Here’s your Sub Zero, now plain zero” and, having cut Buzzsaw in half, “he had to split”.

Killian becomes increasingly frustrated, and the crowd after initial horror begin rooting for Richards. Killian wants to send in Captain Freedom, the retired all time champ played by Jesse “The Body” Ventura, but he refuses.

The action is fast and well orchestrated, with a simple, ’80s bloodiness reliant on practical effects which sees Arnie hack, smash and incinerate his pursuers. Arnie can do this in his sleep, but his odd, unique charisma carries him through and it’s an interesting look at how audiences can be bloodthirsty and fickle.

Arnie’s physical appearance is necessary here, his strength is why he’s chosen as a contender and against better armed enemies it’s ingenuity and brute force that hand him the wins. As a character, Richards isn’t the most developed and we’re expected to just accept him as a hero because he refuses to kill innocents, is fleetingly sad about his brother and tries to protect others, but at the same time he’s rather cold blooded, and physically violent towards Amber when they initially meet. Of course, we root for him because he’s Arnie, which is a clear example of star power. 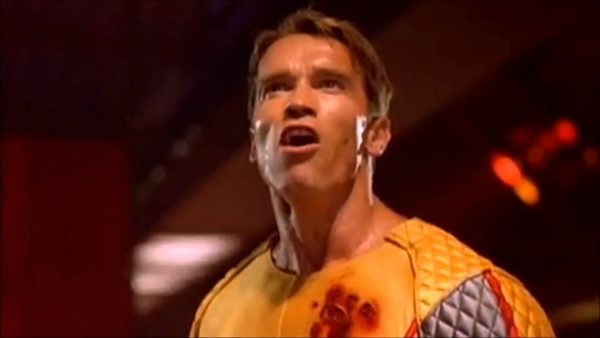 The ending, where the truth is revealed to the audience suggests things may be about to change. But it’s an ambiguous ending, and while Richards is free and cleared, it seems unlikely that the whole system will come crashing down.

In taking a decent premise but injecting the drama and visuals of wrestling and game shows, the filmmakers take King’s decent idea and transform it into something far more engaging and believable. This seems more like a show people would get sucked into than the idea from the book, where they merely evade capture in the real world.

By upping the cheesiness around the spectacle, they actually make it feel more real. That people will swallow and enjoy blood and mayhem if it’s packaged the right way.

One of Arnie’s best films and hugely entertaining.

One thought on “My Favourite Films #49: The Running Man”