It’s weird how things go, isn’t it. In the early 1990s Disney were still buzzing from the success of Beauty and the Beast, and understandably proud of their Best Picture nomination at the Oscars, and they hoped this film would be the one that would do the job for them. In fact, during production it was this movie that was pushed as a priority and the best animators were called in. The B-team, still talented artists, would work on another effort, which would become The Lion King.

In the end The Lion King would become a bigger hit, get better reviews and become more beloved by Disney fans. Pocahontas would open to mixed reviews and sadly slip into the second tier group of Disney movies for many.

It’s a shame, because there’s a lot to like here, but there is a sense of Disney trying a bit too hard for critical props. The ’90s were a time when Hollywood was reflecting on how it had treated the Native American population on screen, and found it’s record rather poor, the result was a bit of an over correction, with some films depicting the First Nations as saintlike figures. It chimed with the environmental awakening of the time, the sense that their relationship with nature was more symbiotic and respectful, but in avoiding the old cliches, Hollywood merely created a new one “the wise native”, a variation of the old “noble savage” trope.

Pocahontas was criticised for this, and the changes it made to a historical figure’s life. John Smith (Mel Gibson), was made younger and more heroic, while Pocahontas (Irene Bedard) was aged into adulthood, which is probably for the best as framing the story as a romance when your female lead is a child would be, well, wrong. In all honesty, I’m kinda not able to weigh in on this much because my knowledge of the real Pocahontas is pretty limited, and part of me feels it’s better to judge the movie for the story it chooses to tell, acknowledging that it isn’t an accurate history. 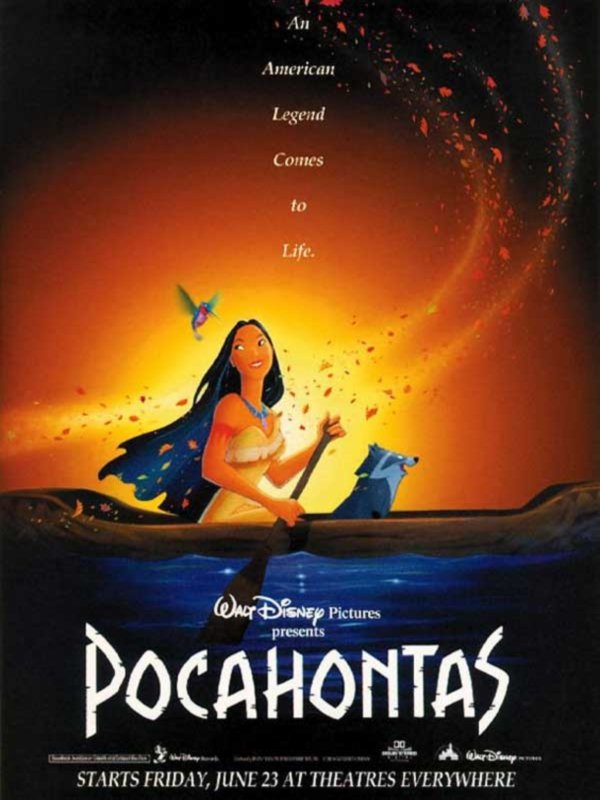 As a movie, I think it holds up quite well. The plot is simple, John Smith and the rest of the English crew arrive in “the New World”, they do it for glory and riches and are led by the greedy Governor Radcliffe (David Ogden Stiers), who has little regard for his men. All of the group have a rather dim view of the “savages” they may meet and Smith is blase in his approach to violence.

The local population, the Powhatan tribe, are wary of these new visitors, although the Chief’s daughter, Pocahontas is curious as the sails of their ship resemble something she saw in a dream. Inquisitive and independent, she investigates, which leads her to encounter Smith.

Following some magical intervention they are able to understand each other and Pocahontas objects to his description of her as a “savage”, pointing out that he applies this to anyone who thinks or lives differently. She shows him how the natural world is a circle they are part of, and not merely something to be used and exploited. Smith’s outlook begins to change and he appreciates Pocahontas’ view and humanity.

Unfortunately, the rest of the two groups haven’t forged such a bond. When members of the tribe are caught watching the English party a skirmish erupts, with injuries on both sides. Pocahontas’ father, Chief Powhatan (Russell Means), worried that they can’t match the guns their enemy has calls all of the villages to send their men to aid in the forthcoming battle. He forbids any contact with them.

Radcliffe, frustrated by the lack of success in mining for gold believes the local people are hiding it and wants to exterminate them to get his riches. Smith attempts to calm his men, but Radcliffe issues a “shoot on sight” order

Can Pocahontas and John stop war from breaking out? Can the two groups live in peace and come to understand each other as our two protagonists have?

I have to admit, I quite like this movie. The themes of peace, love and understanding are admirable, as is the respect and love for nature, a recurring theme in the Disney movies of the ’90s. The way that Smith changes from a gung ho, shoot first type into a man who tries accept and understand the differences of others, it might be a tad more enlightened than a man of his time would be, but it works as a satisfying plot and a good example of how communication can dispel ignorance, suspicion and fear of others.

This fear is shown on both sides, with both groups using the other’s physical differences as evidence of their enemy’s evil. This suspicion of the difference comes to a head in “Savages”, the song both groups sing as they head towards a showdown.

Pocahontas is a really strong character, a true heroine who displays compassion and courage throughout the movie. She stands up for herself, does what is right and shows wisdom in how she tries to show Smith how his world view is limited. She’s a great role model for young audiences, and the attitude of working with and respecting the world around us, of only using what they need, is something we could all benefit from. 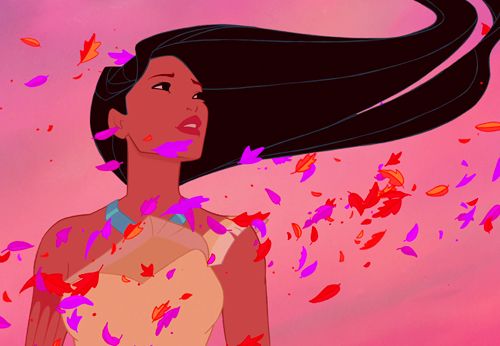 And the movie hits the mark in lots of other departments too, it’s visually striking with some gorgeous artwork and a distinct style. The music, particularly the Oscar winning “Colors of the Wind”, is glorious stuff, and there are a few tracks I really like from the soundtrack.

And despite the serious aspects of the story, there’s plenty of humour thrown in. Pocahontas’ animal sidekicks don’t talk but they have plenty of character, and there’s lots of funny moments throughout the flick.

It’s a really well done movie and one that I’ve rewatched a fair few times, but as much as I enjoy it I don’t have the same affection for it that I do for other Disney flicks. I’m not sure why that is, but it’s not landed the way others have, meaning it falls into the second level of Disney movies.

DISCLAIMER: I’ve done my best to use the terms I think are correct for the people depicted in this film (namely Native American, First Nation and Powhatan), if these are incorrect, I apologise. No offence was intended and I will amend them.