Last year I read Neil Gaiman’s retelling of various Norse myths and loved it, so the chance to read another writer I admire tackling ancient myths was a no-brainer. I’ve long been a fan of Stephen Fry, and I’ve been interested by Greek mythology since I was a kid. 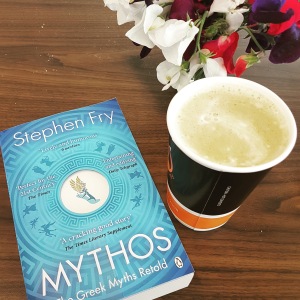 Fry tackles the mythology of the Ancient Greeks in a straightforward manner, starting with the Greek creation myths and then the coming of subsequent generations of life. The titans, the gods and finally humans. He retells the myths of the gods’ births, their origins and feuds.

I’ll admit the stories of Zeus and his siblings rebelling against their father is one I only knew vaguely, and this book highlighted that most of the stories I know are the more action packed stories- Jason, Perseus, Hercules, Odysseus. These are probably covered in the Fry’s second Greek myths book entitled, fittingly, Heroes.

That’s not to say that there isn’t plenty to entertain here. There’s the recurring theme of people coming a cropper either through their own pride or the capricious nature of the gods. It seems like the Greeks were constantly in danger of upsetting one of the gods, and even if entirely accidental the Olympians were quick to hand out punishments which were as inventive as they were petty.

Fry retells these stories with wit, offering humorous asides or observations. It’s clear he’s done his research and it’s quite an informative read, discussing different interpretations of the myths. It’s amazing to see just how much of the culture of the Greeks lives on in the modern day, with Fry showing how the our everyday language is influenced by the gods and monsters they told stories about around campfires millennia ago.

I found it a fascinating read and very entertaining. It loses out slightly to Gaiman in that Gaiman focused on a smaller group of the Norse characters and told them more as short stories, whereas there’s a slightly more academic vibe to Fry’s style. That’s not to say it’s dry or anything, just not quite as engaging or fun as Gaiman’s.

The stories, despite their age and the familiarity are retold here, and often with more detail than I’d heard them with before. I was aware of figures like Midas, Narcissus etc. but only having been told the tales as a kid, often with some of the murkier aspects glossed over. I knew the punishments that befell Sisyphus, but not why he was doomed to constantly roll that rock.

It’s an interesting read, a good introduction to the myths or an expansion for those with limited knowledge. Entertainingly told, but the scope of it all means that they don’t all get the depth you’d like. Fry is on fine form though and I’ll definitely be checking out the next book in the series.

One thought on “Book Review: Mythos by Stephen Fry”