I’ve always had a soft spot for Winnie the Pooh, because of an old video we used to have. The video was called Winnie the Pooh and the Blustery Day, and was frequently watched in our house. Pooh, the bear of very little brain, is such a lovable and easy going character that it’s hard not to warm to him, and the rest of the characters in the Hundred Acre Wood won us over too, particularly the morose Eeyore and the bouncing, bundle of energy Tigger.

That video was a short movie made in 1968 which would later become part of this film, which added a few other stories and extended it out. 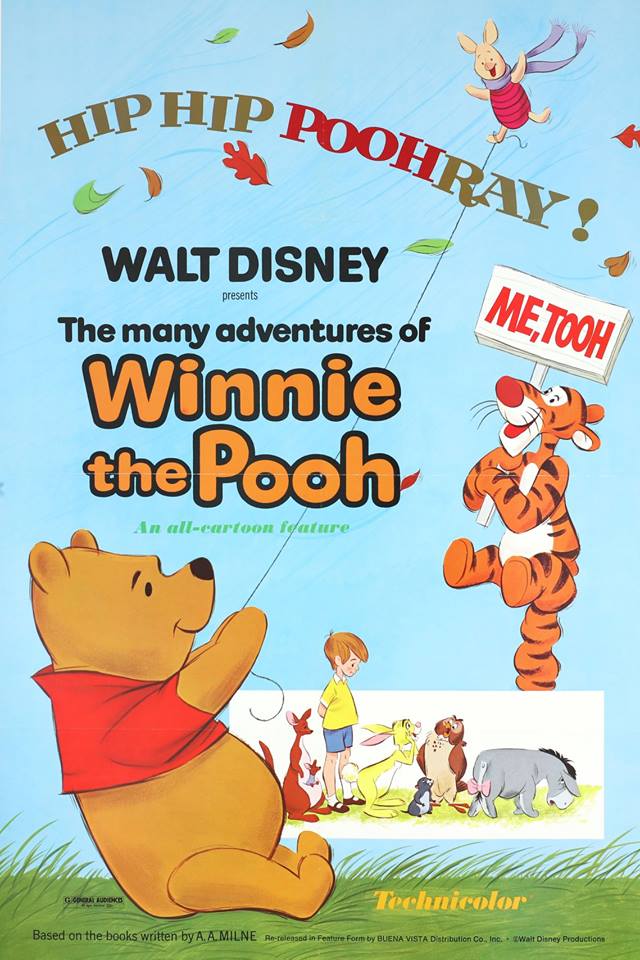 Because of this, the film has an episodic feel to it, but for me it works, partly because of the framing device the movie uses. The whole story is presented as being taken from a book and so we get a narrator and turning pages, and some visual gags based on this (the book being turned sideways to help Tigger when he’s stuck in a tree, letters washed away during a rainstorm).

The humour is gentle but quite clever in places, with the world it takes place in coming from the imagination of Christopher Robin, and so there are childish misunderstandings of things and a certain unreality to proceedings. The rambling, free flowing stories feel like exactly the kind of silly make believe games a little boy would come up with and lend the movie a great deal of charm.

And the characters, as I said, are wonderful. The voice actors and the animation gives each one a clear, unique personality and it’s telling that these are the voices that are still associated with the roles, providing the inspiration for their updated versions in Christopher Robin last year. Whenever I watch this movie again it feels like a sort of homecoming, a nostalgic safety blanket which made it perfect for a recent sick day.

I love these characters, I love the silly little stories and the way it’s executed. I love the trippy “Heffalumps and Woozles” sequence which plays the nightmarish and the comical to the right mix, creepy without being too scary for the little ones.

I love this movie, it reminds me of my childhood and it still has enough charm to work on me as an adult. My nibblings have watched it recently, and both were entranced by it, so it shows that Winnie the Pooh is still popular and will endure into future generations, and these movies are a large part of that.

One thought on “Disney Classics #22: The Many Adventures of Winnie the Pooh”