I’ve read a couple of Charley Boorman’s books before, about the two journeys he completed with Ewan McGregor. I quite liked these books, even if they got my feet itching and made me wish I could ride a motorbike, so when I came across this in a charity shop I thought I’d pick up a copy. 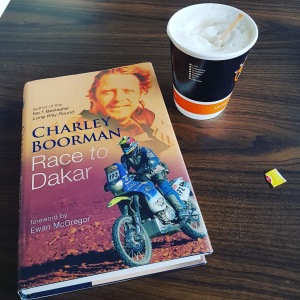 The Dakar Rally is a legendary off road endurance race, with motorcyclists and drivers crossing the deserts of Africa in a race against time. Until 2009 it was raced from various points in Europe to Dakar in Senegal, but has since moved to South America due to security concerns along the African route. This book follows Boorman’s attempt to complete the race in 2006, from Lisbon to Dakar.

Boorman narrates much of the book, following his training regime and build up to the rally and thereafter his progress in the race. The closing stages are split between Boorman and his two teammates, following their diverging paths and experiences.

The problem I had with this book is that I knew how the story ended. It’s mentioned in one of the other books, and so a bit of the suspense was ruined. Even if I hadn’t known beforehand the book actually includes a massive spoiler as one of the pictures and captions a third of the way through reveals some significant developments to come. Poor editing that.

With this element of suspense damaged the book loses a bit of its edge. Similarly, there are sections where Boorman drowns the reader in jargon and technical terms, which made some sections utterly baffling to someone who knows very little about motorbikes.

That’s not to say it isn’t an interesting read and shines a light on the organised chaos that the Dakar Rally is. Boorman notes that the rally officials have to walk a tightrope- trying to minimise some of the dangers while also ensuring the race is still tough enough that completing it is an achievement and the event doesn’t lose it’s reputation and mystique. The organisers can’t quite manage it and there are serious injuries and even deaths along the way, with the majority of competitors either being disqualified or having to retire.

The tough aspect and the mayhem that the riders encounter makes for interesting reading, and the three narrators touch on the mental strength needed and the different characters who take part. Some attempt it once and walk away, while others are drawn back repeatedly, despite injuries and setbacks, they became almost hooked on the rally, obsessively returning to try and finish.

I enjoyed the book, but there were times when Boorman irritated me. He gripes a lot in places, which is fair enough, but he seems to have a chip on his shoulder. He seems obsessed with the idea that people want him to fail or come a cropper, and this gets a little tired especially as we see no evidence of it, in fact we see dozens of people who try to help him complete his goal. The other failing is that when his coach hassles him about slacking off, Boorman gets the hump and sulks, which is daft as his coach and teammate is a Dakar veteran and is talking a lot of sense.

I think the tension and pressure of the conditions don’t help Boorman, and unlike the other books there’s no McGregor to counterbalance his grumpiness. It’s a decent read and it held my intention, but there are times when Boorman’s moping is annoying and the book improves when the other narrators are added.

One thought on “Book Review: Race to Dakar by Charley Boorman”