I quite like Dan Brown’s novels, they’ve consistently proven to be entertaining, fast paced thrillers. And this book, the first entry in the Robert Langdon series shows that Brown got his formula down early. 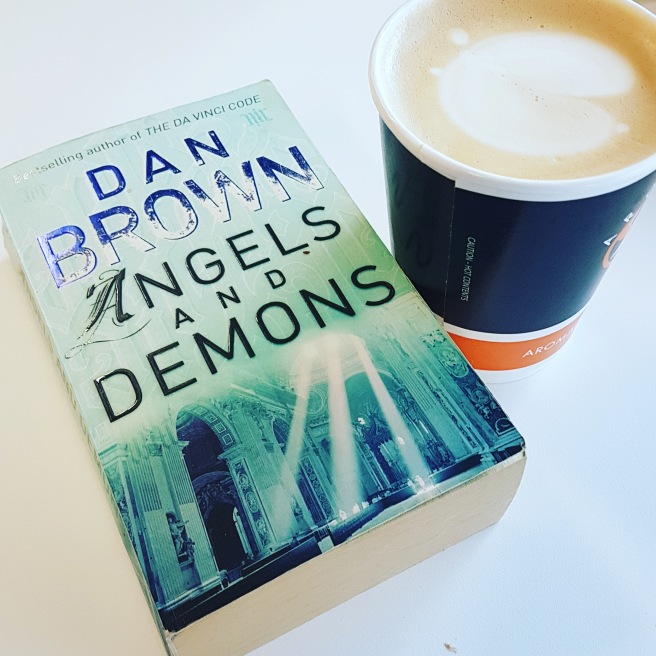 We’re introduced to Langdon as a quiet, slightly quirky, Harvard professor specialising in “symbology”. In the middle of the night he gets a desperate phone call and is faxed a gruesome crime scene photo depicting a man branded with the long lost Illuminati brand. The Illuminati being a secret brotherhood of influential scientists who wish to destroy the Catholic church for it’s persecution and smothering of previous scientific thought. Langdon, an expert on the group, is sceptical, as the group is thought long dead.

A short super-jet flight later and Langdon is at the CERN facility in Switzerland. The dead man is a scientist and Catholic priest, and it transpires that he was killed so that his lab could be accessed and his antimatter stolen. The antimatter has massive possibilities as an energy source but due to it’s instability is highly destructive if it interacts with matter. The antimatter is only stable for 24 hours.

Langdon and the dead scientist’s adopted daughter, Vittoria Vetra, also a scientist, are then whisked to the Vatican where the antimatter has been hidden. The Illimuniati plan to allow the clock to run out, destroying the church’s spiritual home and killing the higher ranks of the church as all the cardinals are gathered in conclave to elect a new Pope. The killer taunts them, stating that he has kidnapped the four most likely candidates and will kill one every two hours, and leave their bodies in a public place, each branded with one of the Illuminati brands for one of the elements.

Langdon works out that the bodies will be left in churches along the “Path of Illumination”, a secret route that will be revealed by clues in order to guide potential Illuminati members to the group’s lair. But the path remains a mystery all these centuries later, the Illuminati base having never been discovered.

Can Langdon and Vetra crack the code and trace the path? Will they be able to save the cardinals? Can the antimatter be found and removed in time? And with the Illuminati having infiltrated the Vatican so deeply, who can they trust? And is this really the work of an ancient cult, or is there more going on?

The plot is delightfully far-fetched, and Brown keeps the action moving quickly as the story unfolds. The ticking clock aspect is an easy way to add tension, but it works and the clues all hang together, although it is stretching credibility that the clues needed, often statues, would still all be intact and in place after hundreds of years.

Langdon makes an engaging lead character, caught out of his depth and torn between exhilaration and horror. Thrown into an adventure a world away from his life as a professor, Brown ensures that the character never becomes an irritating Mary Sue, stumbling along the way and relying on luck and others in some instances. He’s given enough foibles and fears to ensure he remains sufficiently average to be an engaging hero.

The only problem is that for me the book included a few too many twists in the later stages, and while a couple work quite well, there’s a certain point where it’s almost laughable. It doesn’t help that a couple of the twists are easy to spot and for me the penny dropped several times before the big reveals.

The ending as a whole felt a little flat and too neat, with all the loose ends tied up extremely quickly, or merely ignored. Reputations have been ruined, murders committed and yet there’s a “they all lived happily ever after” vibe that doesn’t ring true.

That aside this is still a decent read, the kind of thriller you can easily lose yourself on and Brown doesn’t slow down enough for you to really appreciate the daftness of some of the plot points. Very entertaining, and good fun.

Verdict: Too many twists and some predictable turns derail it slightly in the closing stages, but for the most part Brown succeeds in crafting the kind of easy, engaging thriller that provides a fun way to pass the time. It gripped me early on and the pace meant I never lost interest. Solid. 7/10.