During an interview with Jonathan Ross I heard this movie compared to Die Hard, which is fair enough given that this has a similar plot of a lone hero going up against a gang of terrorists. But really the film that this is most like is the Jean Claude Van Damme flick Sudden Death, the only difference being that instead of taking place during an ice hockey match, this is during a football game. 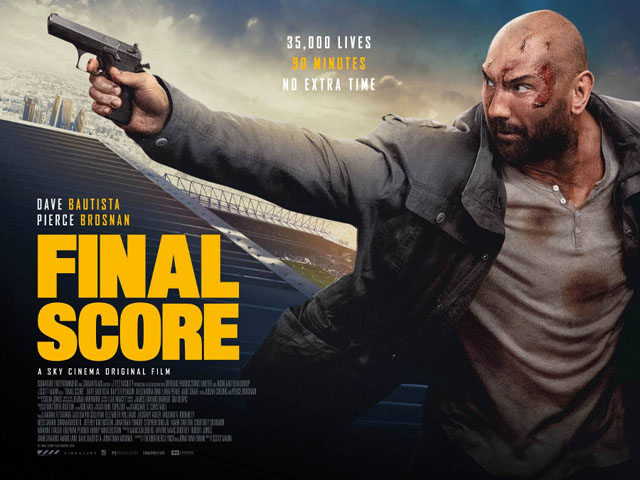 Dave Bautista plays Mike Knox, an ex-soldier who comes to London to visit the family of a fallen comrade, who he was good friends with. He is an uncle figure to the man’s teenage daughter, Danni (Lara Peake), who he surprises with tickets to go see West Ham in the European Cup semi final (one of the more far fetched parts of the movie). While there he starts to suspect that something isn’t right and stumbles across a bunch of Eastern European bad guys.

Unfortunately, he also loses Danni, who sneaks off to see her boyfriend who is sitting elsewhere in the ground. Incidentally, the boyfriend is one of the worst written characters in recent memory, I get that he’s meant to be a douche, but you’ve got to show at least some charm that explains why Danni is into him, but here he’s just a turboknob in every scene.

With the stadium cut off from the outside world by the terrorists, and the police not believing him, Mike has to find a way to stop the villains and find Danni.

The problem with this movie is that a lot of it feels very familiar, as it lifts wholesale from other movies. There’s a fight in the kitchen which reminded me of Sudden Death and Under Siege 2, and Mike gets the attention of the cops by dropping a body off the roof just like John McClaine did. And one of the goons he takes out as a vengeance seeking loved one in the crew, like the brothers in Die Hard.

That’s not to say that the movie isn’t fun, the action sequences are pretty good, particularly a motorbike chase and the kitchen fight which features two inventive ways to kill a bad guy. Bautista is a decent enough lead, although due to his massive size the “everyman” aspect of the scenario is hurt a bit, and the dialogue he’s given is pretty generic. He’s likeable enough in the role, but he definitely lacks the charisma of many other action stars. 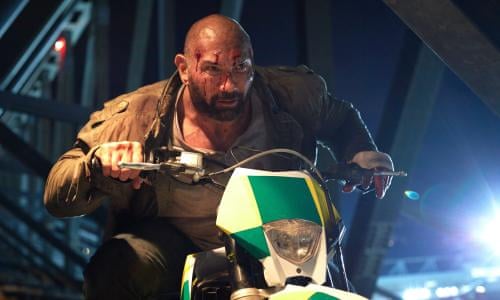 The film does deserve praise for the set up actually making sense, with the crew led by Ray Stevenson’s Arkady attacking the stadium during a match because they’re actually looking for one particular person, his brother, the former leader of their revolution who faked his death and relocated due to the bloodshed that was happening in his name. Aware that he lives in London and will be attending the game, they spring into action. It’s a clever, neat set up and gives them a believable motive.

Pierce Brosnan plays the brother, Dimitri, and is criminally underused in a dull role. It’s especially galling as this is supposed to be the figurehead for a revolution, so you would expect him to be quite a charismatic figure, but Brosnan plays it very dry. This robs the movie of the point of having a big name in a supporting role, as you feel any middle aged actor could have played the role. At least he doesn’t sing, I guess.

However, this is undercut by the fact that Ray Stevenson’s villain is unforgivably dull. While he’s shown to have a ruthless streak and military background that make him a legitimate threat, he gets no unique traits or flourishes to engage the audience. I miss when villains were more colourful.

In a way, he serves to illustrate the movie’s major flaw- it’s fine, and does the job, but in an extremely workmanlike fashion. There’s very little flair or charm to elevate this above the standard action fare you got in the early ’90s. It’s a decent enough popcorn movie, the kind of thing to pass the time of an evening, but it’s miles off the Die Hard level.

Verdict: A distinctly average action flick which is let down by a lifeless script and characters who don’t jump off the screen. Does the job, but without any flash. 5/10.