It’s been a pretty crappy week for me. Work has been rough, I’ve been crabby and WoM and I have both been snappy with each other. I thought for sure that the Universe would seize on this opportunity to kick me while I was down. That Wales’ first match in the new Nations League would prove be a rancid cherry bomb on the top of the s**t sundae.

Thankfully, whatever plans the Universe had were upset by Ryan Giggs and his team of utter heroes.

Trapped at work for much of the first half I had to rely on sneaky glances at my phone. Luckily the news was all good. Six minutes in, Tom Lawrence gave Wales the lead, from a beautiful Joe Allen pass (just seen the replay).

A little over ten minutes later, Gareth Bale extended the lead with a goal which is just amazing, with a cross-field pass from Ben Davies finding him. He cut inside beautifully, and then curled a corner from the edge of the area. Brilliant. Thanks to everyone who posted a video of this on Twitter!

Aaron Ramsey would add a third shortly before the break, by which point I was almost home. I cracked open a Thatcher’s Gold (product placement in the vain hope they send me some free cans), and settled in for the second half. It’s usually my luck that I miss when Wales are on top and then tune in for a heartbreaking collapse.

While the second forty-five wouldn’t be quite as much fun as the first must’ve been, it was far from a disaster. Wales were the dominant force, passing the ball about wonderfully and creating chances.

A fourth goal arrived courtesy of Connor Roberts, who capped a fantastic move. Receiving the ball from Bale he controlled it and then struck a sweet half-volley past the Irish keeper. Beautiful. 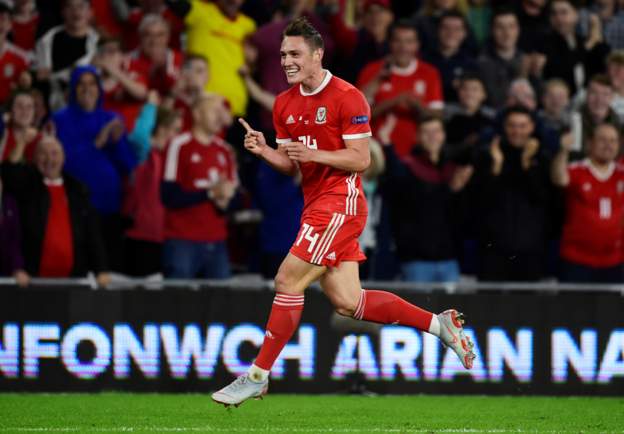 Ireland pulled one back in the 66th minute after Aaron Ramsey lost his footing on the edge of the area, allowing Shaun Williams to grab a goal that felt like little more than a consolation.

There was a time that I would have been afraid that this was the point that Wales would fall apart, but we’re a different animal now and this minor blip didn’t throw Wales off their game. In fact, Giggs was so comfortable and confident that with quarter of an hour to go he took off Bale, our talisman and brought on Tyler Roberts, making his international debut.

Roberts impressed on his first game in the red, going on a cracking run from the halfway line, beating a couple of Irish lads and then, after a neat one-two with Ramsey forcing a save and earning a corner. I can’t wait to see more of the lad, even if it puts me in the unusual position of actually liking a Leeds United player (I think the late Gary Speed was the last one).

Wales had a series of corners and a few more opportunities, and somewhat greedily, I was hoping for a fifth to completely kill it off, but it didn’t arrive. The closest we came was when David Brooks was through goal, only for Enda Stevens to pull off a fantastic tackle and dispossessed him just before he could shoot. It’s one of those tackles where there was no margin for error, if Stevens had been an inch off or a second later, it would have been a penalty, but to his credit, he timed it perfectly.

After this the game settled down, Wales still knocking it about well, but with less urgency, as they cruised in for the win.

It was just what I needed after a crappy day, and as “Hen Wlad Fy Nhadau” rang out at the ground I sang along on the sofa, goosebumps on my arms and my eyes a little misty. Thanks to the team, and for the progress Welsh football has made, it’s a long way from me angrily storming to bed after yet another defeat.

One thought on “Irish Eyes Aren’t Smiling: Wales vs Republic of Ireland”