You’d think after the disappointment of The Kissing Booth that I’d be wary of any more Netflix produced rom-coms, but darn it, I love rom-coms, so gave this a watch.

Thankfully, this is a far better movie. Firstly, the plot is brilliantly simple- Charlie and Harper (Glen Powell and Zoey Deutch) are overworked personal assistants, who regularly find themselves as the last people working in their building. They realise that if their workaholic bosses were in relationships it would benefit them as (a) they’d be happier and easier to work for and (b) they wouldn’t be in the office as much. And so they decide to set it all up and get them together.

Of course, there are hurdles in the way and our heroes have to deal with other issues. Will Harper find the courage to submit some of her writing to her editor boss? Will climbing the corporate ladder really make Charlie happy? Can his relationship with model girlfriend Suze (Joan Smalls) survive despite them not having much in common or even talking that much? Can Harper find love for herself as well as her boss?

Once the premise is set up the movie has some fun with the way that Charlie and Harper know everything about their bosses and how to play them. The initial attempt to create a “meet cute” goes hilariously wrong, but soon they get the ball rolling and begin reaping the benefits. The movie also works well to play off the contrasts between the two assistants, the rather sweet and cheery Harper clashing with the more cynical and shallow Charlie. Both actors give solid performances and win over the audience that we buy into their misadventures and the romance that inevitably blossoms between them works well. Harper makes Charlie reassess his life and want to do better, while he pushes her to take risks and be less insecure in certain aspects. 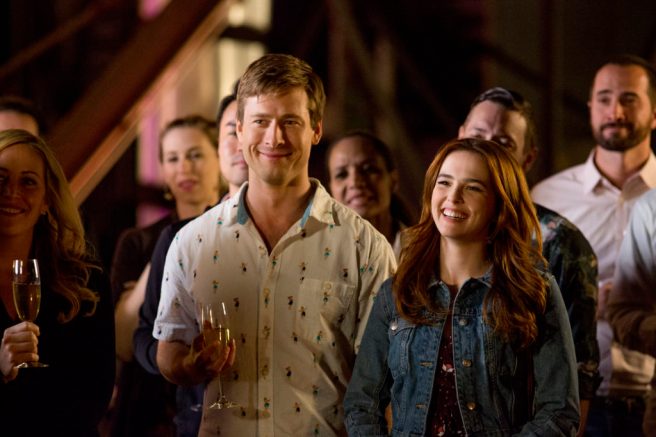 While Powell is solid and cool as Charlie, he’s outshone by Zoey Deutch, who is wonderful. She’s endearingly cheery throughout and her sweet, charming performance reminded me of the rom-com legend Meg Ryan, and she is the emotional heart of the movie. It’s easy to see why Charlie begins to develop feelings for her, and why she makes him want to be a better man.

But both leads almost have the movie stolen from them by Lucy Liu and Taye Diggs, who play their bosses. Both seem to be having a ball playing the demanding, pedantic bosses who issue outrageous demands to their staff. In the early stages Diggs and Liu convince as cold, cut off execs, but as their manufactured relationship develops we get to see glimpses of their softer side. It’s here Liu excels, as she manages to catch the conflict her character faces- torn between her cynical side and the teenage-like glee she shows when happily in love.

The plot is predictable in places, but the film doesn’t suffer for it, as the plot unfolds nicely and the performances are all very good. Both relationships are handled well, and all four characters share that they are struggling to open up at the start, which is something they have to address as the story goes on.

It ticks a lot of the rom-com boxes and I found it very charming. Worth watching, and considerably more satisfying than The Kissing Booth because it actually works on developing the characters.

Verdict: A well made rom-com which works due to the performances and characters. It’s not gonna change the world, but it’s a good addition to the genre and a very charming experience. 7/10.