One of the questions during Infinity War was where was Paul Rudd’s Ant-Man? As one of only a handful of heroes not to appear, Marvel fans were left wondering where he and Hawkeye were when Thanos attacked. Luckily this film explains a lot of what Scott Lang was up to.

Last seen locked up with the rest of Team Captain America (Chris Evans) at the end of Civil War, Scott has done a deal which has seen him allowed to return home but forced to live under house arrest. He has gone into business with best friend Luis (Michael Pena) starting a security company, and has no contact with Hope Van Dyne (Evangeline Lilly) or Hank Pym (Michael Douglas), who helped him become Ant-Man.

After Scott shrunk to a subatomic level entering the quantum realm and returned, Hank has begun to think that his wife may still be alive, trapped down there. The father and daughter team prepare to find Janet (Michelle Pfeiffer), but their machine doesn’t work, however, Scott has weird dreams about Janet and her memories. After leaving a message with Hank, they kidnap Scott, who worries about breaking parole with only a few days left.

While they try to work out what’s going on they have to deal with black marketeers who are after the quantum tech Hank is working on, and a mysterious figure known as Ghost (Hannah John-Kamen), who wants the quantum machine in order to drain Janet’s quantum energy to stabilise her powers which cause her immense pain and are slowly killing her.

Can Scott make peace with Hank after forcing him underground and stealing his suit? Will Scott and Hope reconcile and get their relationship going properly? Will they rescue Janet or will Ghost get to her first? Will Scott get caught and sent back to jail?

First of all, I have to say that this movie is great fun. The dialogue sparkles with humour and the action scenes are magnificent, really making use of the characters’ shrinking and growing powers to create striking, inventive fights and chases. Paul Rudd is predictably great as Scott Lang, and is a likeable, charming presence at the heart of the film and Lilly does really well as his more collected partner. Lilly’s intensity and badassery is a nice contrast to Rudd’s goofiness, and the Wasp is a great addition to the MCU and I hope to see more, but this is still Rudd’s movie. 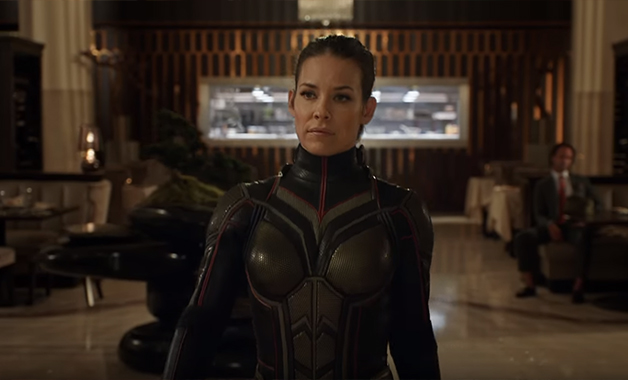 Despite everything this movie does right this feels like a lesser entry into the MCU canon. While still hugely entertaining it fails to live up to the shared universe’s recent run of form (Guardians of the Galaxy Vol 2, Spider-Man: Homecoming, Thor: Ragnarok, Avengers: Infinity War). It’s hard to pinpoint exactly what’s missing but I think it may have to do with two major factors:

Firstly, after the massive scale of Infinity War it feels rather small scale, and while it explains Scott’s absence there to an extent and has one killer reference to the film’s events, it lacks the emotional punch of that film.

Secondly, the film drops the ball with Ghost.

A lot of people say that the MCU has a villain problem, but for me this is something the most recent run has worked hard to fix. We’ve had characters like The Vulture, Killmonger, Hela, Ego and Thanos, all villains who have posed a serious threat while also having solid motivation and varying degrees of depth. You felt some sympathy for Killmonger and Hela, cast out by their families. Ego was unrepentant in his ruthless plot. Thanos while flawed showed some love for Gamora and the Vulture remains probably the best of the bunch, a flawed, desperate man pushed to extremes to support his family.

So, what’s wrong with Ghost? Simply put the film makes her far too sympathetic. We see her suffering from the effects of her powers, hear the tragic backstory about how she gained them and how SHIELD weaponized her. The problem is that this could set up a debate about which life is more important, Janet or Ghost. Is it fair to save Janet if it means they can’t cure Ghost, is it okay to kill Janet to save a life? Unfortunately this conflict is never fully developed and while Hank offers to help we never see him working on it, as he’s focused on his wife, understandably.

Worst of all, the film’s actual resolution feels rushed, overly simple and disappointing.

It seems the film has decided that Ghost isn’t a true villain and they throw in Walton Goggins’ smarmy black marketeer, Sonny Burch. While Goggins is quite good in the role he’s clearly there to be a real villain of the piece, but his goons are never an even match. Perhaps had they given Burch a few flash weapons or even a super-powered goon for hire the fights may have been more evenly matched, but as it is they pose little obstacle for our heroes or Ghost.

The laughs come fast and furious, the characters are solid and engaging. The visuals are magnificent and well worth checking out on the big screen, but the film sags and disappoints at the end. Well, apart from one of the best post credit scenes so far.

It feels a waste of the characters and a step back, the first film since Thor: The Dark World that feels like a rushed sequel and not part of a growing universe.

Verdict: Fun, but disappointing. Rudd, Lilly and Pena are great, but they soften the villain too much and it’s definitely a lower tier Marvel movie. 7/10.

One thought on “Film Review: Ant-Man and the Wasp”