I found myself identifying a lot with Ralf Haley. Like him I was a kid who loved football and who dreamed of being a professional. And like him, I was nowhere near good enough.

It’s a dream billions of kids have across the world, with only a relatively small number of them achieving it. I knew I was crap even as a kid, and realised that my few skills – okay in the air, hoofed clearances and hacking tackles, weren’t going to be enough. And so, my dream faded away aside from bus stop daydreams where I envision myself leading Swansea to Champions League glory.

Haley, however, reignites his dream and despite hating exercise and not having played a proper match in years decides to give it one last go. He just wants to get paid to play once. One euro, one minute, it doesn’t matter. He’ll still be able to say “I was a professional footballer”. 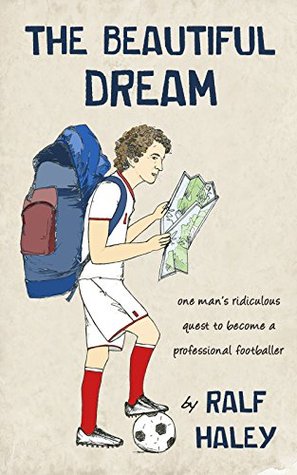 Haley sends requests for trials all over the world. He joins the gym, which he hates and tries to play more football. He also starts saving money from the job he hates to fund his trip to various countries.

He chooses smaller, less successful footballing nations and sets out with his brother in tow. Malta, Andorra, Latvia and Lithuania are among his destinations as he tries to get a game.

It’s a frankly crazy idea but one that is admirable in it’s ambition, naivety and optimism. Haley wants it badly, and throws himself into his trials.

The problem is that while the quest is noble, it feels half baked and left me wanting more. Haley gives himself a few months to train and save cash, leaving him a relatively small budget. I found myself wondering why he didn’t save for longer which would have helped him go to more places and got his fitness to a higher level too.

This not only would have made the book more interesting and given Haley more countries to write about, but would have helped his chances, as his low key build up leaves his mission looking pretty likely.

The writing is good, if nothing special and could do with a bit more of a polish. And the tone shifts quite a lot, with lots of moaning slightly souring the optimism of his journey. Haley is likeable enough and fairly humorous, but the banter between him and his brother grated on me, completely failing to win me over. It’s like an inside joke, with me being the outsider who views it as stupid.

That being said it was a decent read and Haley’s conclusion is strong. And I had to admire him for just going for it, despite the odds.

Verdict: Flawed but fun, Haley’s dreams surpass his abilities as a writer. A decent attempt at the dream but at times a frustrating one as you wish he had done more. 7/10.