Another compilation movie, which like Make Mine Music uses popular music as the driving force behind many of the sections. And again, the results are a mixed bag. 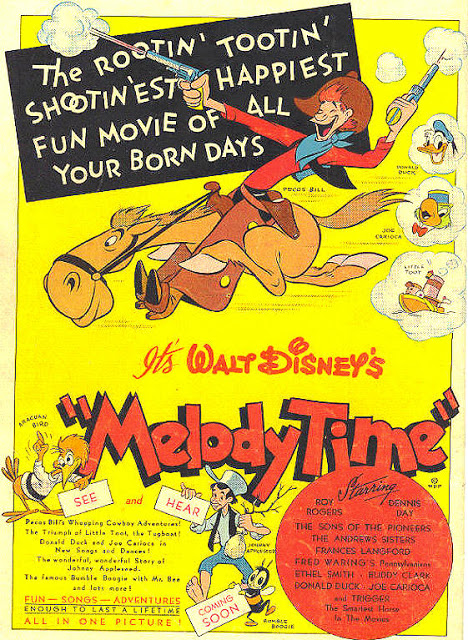 These package movies were later cut up and distributed in different ways and the opener “Once Upon a Wintertime” must have appeared on a Christmas video because I’d seen it before. The short is rather quaint, dealing with a young couple who go skating on a frozen pond and there’s a nice touch in having the young lovers followed and copied by a pair of lovestruck bunnies.

It’s all cutesy stuff, but not without its charms and there’s a little bit of action as tragedy almost befalls them thanks to some thin ice and a waterfall. It’s decent enough, and in the context of this movie one of the high points.

The low comes courtesy of a section called “Trees” which is instantly forgettable. Another duff entry is the story of Johnny Appleseed, who is apparently an American folk hero. Why is hard to see from this offering as the story seems to be that this fella went and grew apples in the West. That’s it. I’m sure the real story has more to it, but here it’s all rather dull.

Johnny goes West, befriends the critters, plants the trees and these help the westward expansion of America. I don’t want to get too political here, but even for a kids’ movie this dumbs down the pioneer years and we see Native Americans briefly at a festival where they celebrate apples, everyone is happy with the new status quo. Most worryingly is a kind of manifest destiny vibe where Johnny’s guardian angel tells him to go West to help the frontiersmen, as if the whole thing is divinely mandated.

The musical accompaniment is alright, but the story is rather uninvolving. Slightly more entertaining is “Blame it on the Samba” which reunites Donald Duck and Jose Carioca for the third time. This upbeat number is quite fun and the visuals, featuring the cartoon characters interacting with live action organ player Ethel Smith. The problem is there doesn’t seem to be a story or much of a point, and it’s just a nice upbeat part.

Similarly “Bumble Boogie”, which presents a jazzy update of “Flight of the Bumblebee” is quite fun. It’s got a surreal vibe and the marriage of music and visuals is well done, with the musical instruments morphing into flowers and other things which the bee hero navigates his way through.

The remaining two sections have clearer stories and the first of these, “Little Toot” sung by the Andrews Sisters is quite good fun, dealing with a young tugboat who wants to be like his dad but only succeeds in causing trouble before coming good.

The last section, and the one which closes the film, is the story of Western folk legend Pecos Bill and is narrated by Roy Rogers. It’s got some nice moments, mainly from the hyperbolic exploits of the hero, who lassos a tornado and uses lightning to light a cigarette. There’s a goofy spirit to the proceedings and it’s probably the most fun of the sections, and the story is well done. The visuals are reminiscent of the madcap Looney Tunes style and it has an energy which is lacking elsewhere.

Again the wilderness period throws up another package film, and this one has more misses than hits. While the art is solid throughout, and the marriage of live action and animation is slicker here, it still feels lacklustre and too much seems to be included to bump up the running time.

I can’t wait to get back to proper feature length stories, oh well, at least the end of the wilderness period is in sight now.