We’re still deep in the wilderness years for this one, which is kinda like a pop music version of Fantasia, with this being a series of animated pieces to music. The problem is that in terms of art and music it can’t match the earlier effort. This is understandable as this was made during the Second World War and many of Walt’s men were overseas or making propaganda. Feature length animation had stopped being a priority and like Saludos Amigos and The Three Caballeros, this is a package affair. 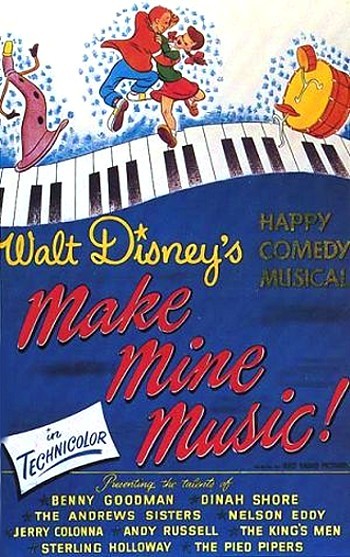 While those were linked by themes of location, here it’s a much more muddled effort and as such the segments are rather hit and miss. As a kid I must have seen some of this as I remember the “The Whale Who Wanted to Sing at the Met”, the final part and this is one of the stronger, telling a complete story which uses music well and is quite funny.

Aside from this it all felt new to me. Some pieces like “After You’ve Gone”, “Two Silhouettes” and “Blue Bayou” are incredibly forgettable, and I’d struggle to give many details on any of them, despite having watched it a few hours before writing this.

These are the more serious parts and they all fall flat, with the comedic entries having to carry the film and even here they drop the ball. “Casey at the Bat” a reading of a poem about a cocky baseball player coming a cropper is quite fun, but goes on a bit.

“Peter and the Wolf” is the closest this gets to classical and it’s a well done piece, with the different instruments working well and the cartoon style in bringing the characters alive is charming, even if the ending is a cop out. 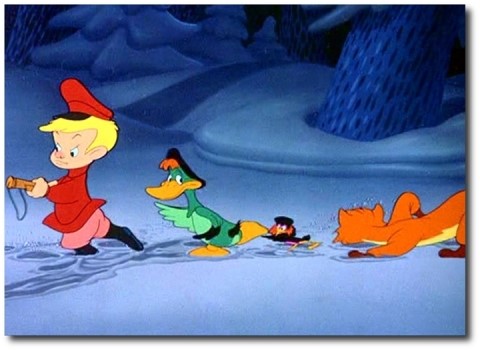 The hillbilly star crossed lovers who turn up in “The Martins and the Coys” are quite good fun too, even though it is a bit weird to see a bloody turf war turned into comedy. Nonetheless, it’s got some nice touches and the ending where the loving couple fall out after marriage is a neat kicker to the story.

“Johnnie Fedora and Alice Bluebonnet” is sweet enough but rather dull, but the jazzy “All the Cats Join In” is a treat. Capturing the fun, fast paced life of a group of teenagers it’s cleverly animated with the artist’s pencil adding details as the story progresses. The dance scene is quite good fun, and the energy of the piece lifts the film, although any momentum is utterly lost in “Without You”, a mournful ballad of lost love.

All in all this is a frustrating watch with the changes in tone jarring and the lack of a through line to connect the pieces means it never feels like a movie and rather just a collection of shorts. And you wonder why they’ve been put together in this order.

One thought on “Disney Classics #8: Make Mine Music”