This is a Disney movie largely remembered for the death of one character and the fact it has made generations of children cry. 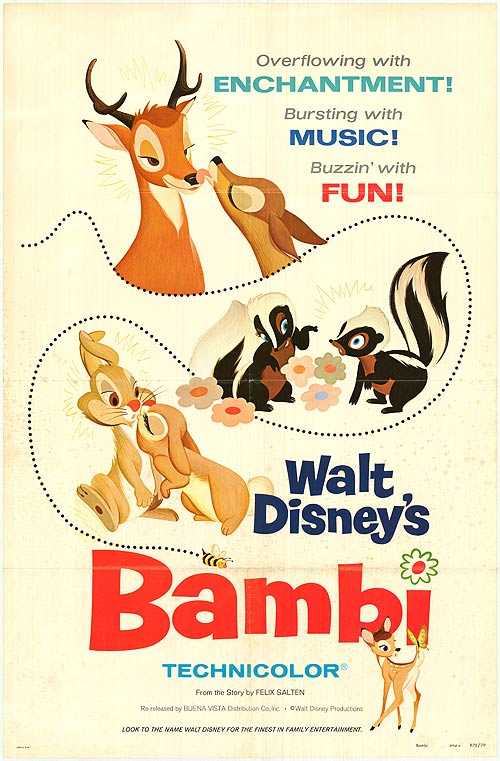 The shooting of Bambi’s mother is the film’s most famous moment and I won’t lie, it’s done remarkably well with the death happening off camera and Bambi only realising what’s happened after the fact. His dad breaks the news to him in a rather blunt manner “your mother can’t be with you anymore”. Dude, soften the blow a little.

And devastated Bambi’s reaction gives the heartstrings a massive yank. 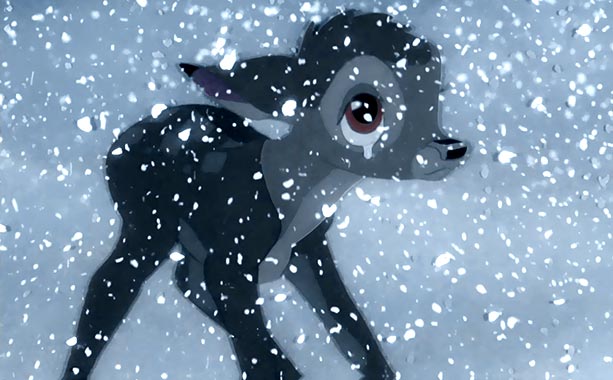 The whole movie is a pretty decent “life of animals” tale, starting with Bambi’s birth and following the eponymous deer to adulthood. Sure some of it is sentimental and softened, but there’s still a dark edge, mainly from man but there are acknowledgements that nature is rough.

Bambi has to fight when another stag steps to his girl, in a sequence which is shot in a stark, dramatic style which makes it so different from the rest of the movie.

The real villain here is man, who after killing Bambi’s mum then run through the woods guns blazing and then start a fire. Mankind does not come off well in this movie, and some of it is harsh. One bleak scene involved some birds cowering in the undergrowth before one cracks under pressure and takes flight, we then see her body hit the deck. It’s not quite at the grim level of The Animals of Farthing Wood, but it’s got a whole lot more edge than I remember.

Heck, Bambi kills a bunch of dogs after causing a rock slide on to them. It might be a softened version of the natural world, but it doesn’t completely ignore the fact that nature can be brutal.

The circle of life is completed when Bambi becomes a dad himself, which follows a sequence where our hero and his friends become “twitterpated” which is basically  Disney slang for overcome with lust. Seriously, there is some visual innuendo going on here which had clearly flown way over my head when I first saw this movie.

Character wise it’s a little flat and the songs aren’t particularly great, but it’s episodic style works and it keeps moving. Also it handles the shifts in tone quite well and is genuinely moving in places. Also it’s very pretty to look at.