I made a noise yesterday I don’t think I ever have before. I didn’t know I could and I don’t know what it was exactly.

It was a weird shriek that burst forth unbidden and unstoppable. A primal cry of joy and relief.

It happened after Hal Robson-Kanu scored a winning goal for Wales. It was a moment of surprise and Glee, Joe Ledley threaded a lovely pass to Aaron Ramsey, who looked to have fluffed it before the ball found HRK, who found the net.

In truth it was a clumsy strike, the ball coming off his shin to go between a defender’s leg and past the keeper. It was not a classic goal, but they all count, and for Welsh football fans it counted for a lot.

The English talk of “50 years of hurt” but that follows a massive high, for Wales our previous best was playing at a World Cup 58 years ago. Playing in, not winning.

During the nineties I watched as Wales failed to make tournament after tournament, starting to wonder if I ever would. But now it has happened, and like most of my countrymen I am just enjoying the experience. Winning the Championship is too much, a far off dream that seems to remote to ever come true, like the man who imagines dating a Hollywood starlet. It would be nice. But it won’t happen.

What we can take is an experience of tournament football. Of knowing that we have a squad and a manager who can grow and develop, that the gap between this and the next tournament won’t be as long (I’d like to see at least two before I shuffle off this mortal coil).

The experience began with a nervy start in Bordeaux. The players seemed shaky and doubt grew. Was the occasion going to get the better of them?

Gareth Bale gave away possesion easily, and they let the Slovakians run at them too much. It was only Ben Davies’ defensive heroics that kept us in it, tracking back he stretched to hack a goal bound shot away.

A few minutes and the team was starting to calm down. Bale and Aaron Ramsey had glimpses of skill, Joe Allen chased the ball with energy and Ashley Williams looked solid at the back.

Around the ten minute mark Jonny Williams was brought down some 30 yards out. Gareth Bale country.

Wales’ most famous and skilled player stood over the ball and then struck a superb free kick, curling it in at the far post and the stadium erupted. I leapt from the sofa, a roar of victory on my tongue. 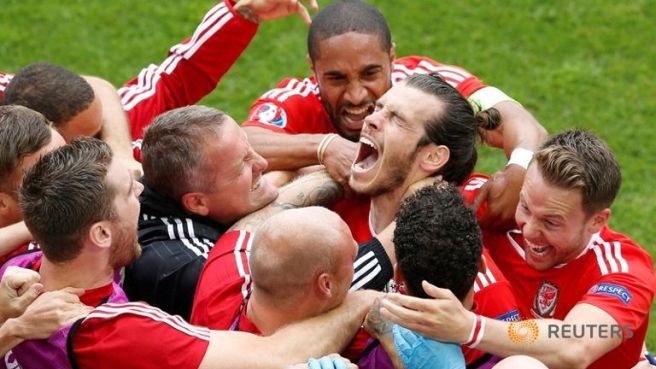 Wales dominated for the rest of the half, but couldn’t land a second blow. Every Slovakian half chance pushed me to the edge of my seat, a one goal margin is not a calm state of affairs. One slip and it goes. Nerves wound tight, muttering encouragement and prayers. Prayers to the footballing gods not to be cruel, to not build us up just to smash us back.

The stadium fills with songs and chants. Tributes to players on the field, and an old player gone too soon. Hymns and arias as the fans make their presence known.

A second chance appears. A clear cut penalty somehow not given. A clear elbow from Skrtel. Bad enough the ref misses it, but the official behind the goal is mere feet away, and does nothing.

Frustration building, until the half time break and a brief respite. Fifteen minutes to savour the lead, knowing it will be safe and then back in, a further forty five of tension ahead.

And then disaster. Fresh legs bringing renewed energy which paid off almost immediately.

Ondrej Duda letting the ball run across him, Ashley Williams not in the best position and the ball driven into the goal.

Slovakia rose, fired up by the equaliser and took charge for ten minutes, and Wales could easily have come undone. But they steeled themselves, rode out the storm and began to take charge again.

A second Bale free kick easily gathered by the goalie. Ramsey unable to direct a header toward goal. A draw would be fine, but Wales deserve more.

Substitute Ledley finds Ramsey. It falls to HRK, and he scuffs it home. Euphoria.

Wales reach the 90 and the four additional minutes tick by agonisingly slow.

And finally the whistle.

The tension evaporates and the sheer, mad joy floods in.

Our first game a good one. It won’t be a whitewash, nobody can say we don’t belong here.

After Russia snatch a late equaliser to earn a draw with England and Wales are top of the group.

A few days to enjoy the other games and relax. And then Thursday and the big one. Wales vs England.

Who knows what will happen? But it should be a cracker.