Despite having been written off as a no hoper in the next general election, new Labour leader Jeremy Corbyn is clearly worrying the Tories given David Cameron’s recent hyperbolic scaremongering and the rather desperate attempts of the press to find something to smear him.
Earlier this week Corbyn didn’t sing the national anthem at something remembering the Battle of Britain. Cue a meltdown, particularly from the right wing media.
How very dare he?! He’s dishonouring the memories. He’s snubbing Big Liz, blah, blah, blah. 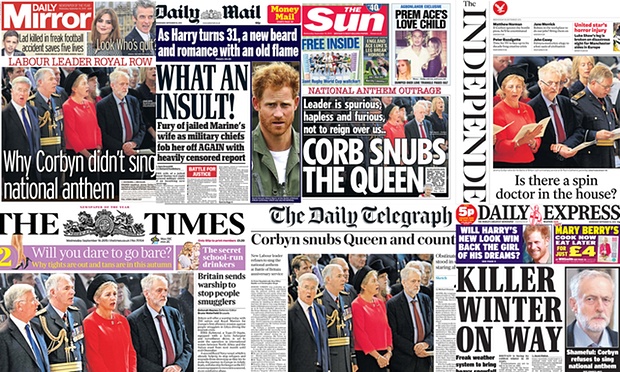 All this conveniently went down just as the House of Commons passed new cuts. Hmm.
Anyway, I feel all the fuss ignored the more important question- isn’t it about time we dropped “God Save The Queen” as our anthem?
There are many reasons it causes problems for different people and adding them all together it makes a convincing argument for a new tune.
Firstly, it’s not exactly cool that it’s a religious song, or more accurately a Christian song. Britain isn’t exclusively Christian anymore and it seems unfair that the anthem we have to sing or will have played when we win a medal doesn’t reflect our views. Why not just have a song about how great the UK is, that everyone, regardless of belief can get behind?
The second reason is similar. Not every Brit supports the monarchy, in fact many want it abolished. So, while they don’t wish the Queen harm, they’re probably not all that fussed on a song about her. Probably why Corbyn wasn’t singing.
Incidentally, you can love Britain without loving the Royals.
So, essentially we have an anthem which is rather divisive, which is the opposite of the idea.
The third reason is that “God Save The Queen” doesn’t represent the UK, because England lack the imagination to have come up with their own.
I’ve touched on this before but for Welsh people (and, as we’ll see, the Scots) “God Save The Queen” causes problems. In matches against the English we’re expected to sing respectfully to a second anthem because it’s “ours” while English fans can just boo, whistle and jeer throughout “Hen Wlad Fy Nhadau”. I’m not saying this always happens but I have observed it.
Welsh fans tend to respect “GSTQ”, but I doubt many feel it represents them. And if it did wouldn’t that be worse? That our opponent is using something which should be for all of us?
It also means that should there be any negative response by other home nations to “GSTQ” it’s viewed not only as poor form but stupidity. We’re booing ourselves, in essence.
Witness the grief Scotland got for booing the anthem compared to the lack of fuss when English fans do the same to other home nations. I think those Scottish fans were in the wrong, and deserved censure. Booing an anthem is disrespectful and not really fair. Even if you object to that nation politically the eleven or fifteen players on the field are no more responsible for that, just as we wouldn’t like to be held accountable for all of Britain’s wrongdoings and mistakes.
The Scots who booed were wrong, but doesn’t it show that “GSTQ” should go? It clearly meant nothing to those fans, just as it doesn’t mean much to many Brits.
In fact some English fans want a change, because they see being English as distinct from being British. Which it is. They want a new anthem for England, I suggest we get a new British one first and then focus on England’s themetune
When a Welsh athlete wins an Olympic medal they have to stand and listen to it. A song that represents one part of this United Kingdom, not all of it.
You can argue that it’s the anthem for the UK, but for me it doesn’t feel like that. It’s the anthem of another country, a country who is often our opposition on the field.
When “GSTQ” plays I feel nothing.
There is no stirring of patriotic feeling, no desire to sing along. It’s a song aimed at a deity I don’t believe in to protect a ruler I’m ambivalent about and a song I normally associate with a country who are our sporting rivals.

Also, an anthem is meant to be constant (unless a regime falls or the country changes) but this is one that will have to change. In fact, the Battle of Britain heroes that Corbyn “dishonoured” never heard “GSTQ”, for them the song was “God Save The King”. The anthem he refused to sing wasn’t even the same one they would have sung.
Yes, it’s time for a change. Get a new anthem, one that celebrates Britain and it’s people, not just one of our richer citizens.
Get one that acknowledges that we are a country of different faiths, beliefs and ideas.
Get one that is actually for Britain, not just the English one extended for the rest of us. Britain is not England and sidekicks, it’s a joining of three distinct countries, each with their own cultures and histories. Each one has its anthem, so let the shared one be distinct and illustrative of this different entity.
If England want to keep it, they can. The UK can have a different one, a better one.
Any thoughts? You know what to do. BETEO.