News of a Gremlins remake/reboot is not good, well, at least not to me. While I appreciate that improved special effects might do a better job of bringing Gizmo and Co to life, I kinda think that misses the point and that the slightly shonky effects are actually part of the original’s charm. 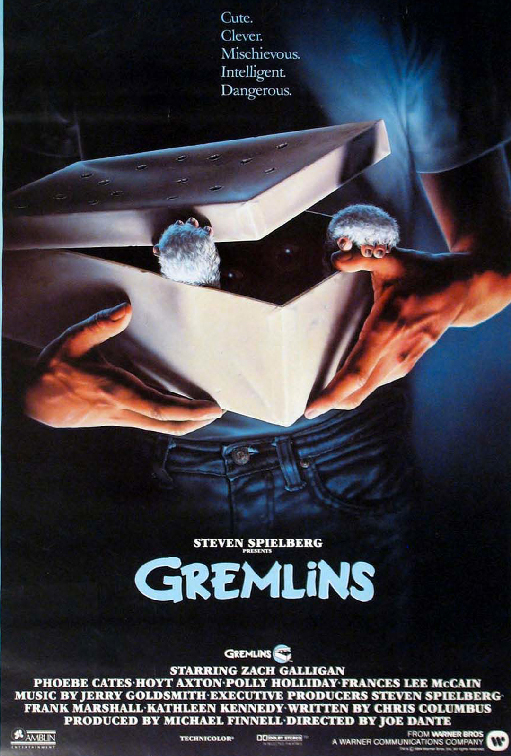 Also the movie belongs to a different time, the 80s when people kinda accepted that kids liked a bit of ugliness and being creeped out. The movie ends with voiceover that tells us that next time something glitches in the house it might be the horrible little beasties we’ve just seen kill and devour innocent civilians. That’s messed up.

Directed by B-movie expert Joe Dante (who at this stage had already made The Howling and Piranha) it’s definitely in his wheelhouse for dark comedy and the Christmas-set movie plays with it’s small town America setting to great effect. It’s like if Bedford Falls was besieged by monsters.

Eccentric inventor Randall Peltzer (Hoyt Axton) visits Chinatown and discovers a cute little critter called a mogwai, which he names Gizmo and buys as a gift for his son Billy (Zach Galligan).

The mogwai comes with rules-

Pretty simple, right? In short order Billy breaks rules one and two. Getting Gizmo wet makes him reproduce while feeding them after midnight turns them into decidedly less cute and more vicious gremlins. The leader of the gremlins, Stripe sets out to build up an army and they set about attacking the residents of the small town.

It’s now up to Billy and his love interest Kate (Phoebe Cates) to stop Stripe and the others and save the day, with Gizmo in tow.

This movie rocks because it has a magnificent dark streak, with Dante reveling in the anarchic, vicious gremlins and their trail of destruction. There are some wonderfully over-the-top deaths, most notably one involving a stair-lift, and the movie swings between creepiness and giggles as Dante weaves in daft sight gags, one liners and surrealism.

One of the best moments for me comes when Kate tells the story about why she hates Christmas, a morbidly funny sequence which pokes fun at the “tragic backstory” trope and which had my Mum and me in hysterics, although MWG wasn’t quite so amused and reckons I have a sick sense of humour, which is just as well for this movie.

The whole movie is a bit of a mess in some ways but it gets by on sheer character and energy, hurtling forwards with fantastic verve. It seems to know that if it hesitates it’s lost so it keeps going until the end.

Dante knows his B-movies and plays on the traditional genre themes (disbelieving cops, nasty characters getting their just desserts etc), crafting a movie which works both as a comedy and a horror, being genuinely jumpy and unsettling in places. The effects have aged terribly in places but the puppetry ensures that the gremlins always feel realistic and have a weight that CG often lacks, that being said Gizmo remains extremely cute.

The cast do their jobs well, but it’s all about the critters, really, although you do wonder how Phoebe Cates proceeded to vanish from the screen after such a promising start to her career. It also features 80s icon Corey Feldman in a small supporting role.

It’s a nasty, funny gem of a movie and an unlikely shout for one of the best Christmas movies ever made.