Sipping coffee outside on a mild April afternoon talking to Elin Walker Jones is a bit like chatting to one of your mum’s friends. “Nice” isn’t a word that gets used a lot in politics but Walker Jones is nice, she talks in a soft, friendly manner in an accent that carries the influence of her Carmarthenshire childhood and the North of Wales, where she’s worked.

Perhaps “nice” isn’t used because it can seem condescending, it can hint at blandness or dimness, but neither of these can be applied to Walker Jones, who throughout our talk exhibits intelligence and passion. 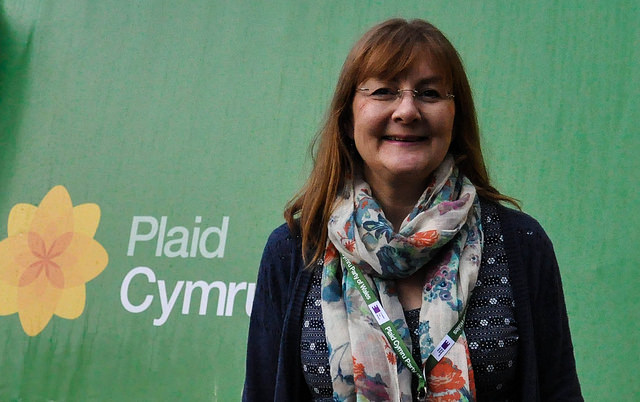 The major focus of this passion is inequality, a theme which crops up frequently. It’s in the books she’s read and her heroes (see below), and she sets out her stall early stating that “an unequal society is not good for anybody”. It would seem that this is her driving force in politics, to try and help restore some balance, and it explains why she’s chosen Plaid as her party

She talks with great emotion of how Welsh voices are unheard, and of how the country is not on the same footing as Scotland. There’s mention to the pledges made by the three main parties made “on bended knee” to the Scotts before the referendum, and while she supported the Yes campaign she confesses to being saddened by how Wales appears to be getting left behind.

Walker Jones is critical of the Barnett formula, and feels that Wales is being let down, stating that if Welsh funding was increased to match what Scotland gets per head that Wales would be £1.2bn better off.

But she doesn’t criticize Scotland, in fact, having visited Edinburgh during the build up she was delighted by the way it effected and invigorated public debate in politics;

There were people talking about politics everywhere…The interest in politics, when so people are disillusioned with what we have, the fact that so many people were engaged is miraculous.

There’s hope that the resurgence in Scottish nationalism will inspire the people of Wales to take steps to change it’s “poor relative” status.

Walker Jones acknowledges that Plaid Cymru have always faced an uphill struggle in the Cardiff North constituency, in 2010 they earned a mere 3% of the vote, and while polls suggest their following has improved, it’s still a tough fight, with 8 candidates in the running, but she still believes strongly in her party, and why it matters, arguing that Plaid “is the only party answerable to the people of Wales”.

She seems aware of the party’s reputation and that the talk of independence can alienate some voters, and is keen to address that the party is not about separatism. “It’s not about separatism” she states, “it’s about having an equal voice, it doesn’t mean taking more than our share, it means having a share.”

Warming to her theme she continued, “It’s about being sister nations at the British table, rather than somebody down below, getting crumbs from the table. Sitting at the table, with everybody else and having an equal voice. We’re the forgotten nation at the moment, and that saddens me.”

The Plaid stance has always been about Wales deciding for Wales, and that’s something that Walker Jones agrees with wholeheartedly. She alludes to the recent calls for “English votes on English issues” and suggests with the majority of Westminster seats representing England this is what happens anyway, but she moves on quickly.

I’m impressed throughout by the lack of negativity she displays regarding the other parties, near the beginning of our chat she says in passing that “politics should be honourable, or what’s the point?”. The only time it really comes up is when she states that Plaid are “very happy to work alongside any party, except for the Tories, that benefits the people of Wales”.

Her only other criticism is reserved for the discussion of the NHS, and it’s clear she has some distaste for the way it’s used as a political football around election time, and believes the time for a rational and legitimate conversation is once everything is settled, and the electioneering can stop.

With her background in psychology Walker Jones is keen to preserve the NHS, although she acknowledges the challenges and expense it faces. She also hopes that it can be used to dispel some of the stigma surrounding mental health, “We need to get much better at talking about these things”.

This is an area that she regards as needing improvement, and that education is key, not only with regards mental health but with other issues, and Walker Jones believes in the importance of the Personal and Social Health curriculum.

“Academic subjects are really important, nobody would dispute that, but, as a psychologist, I think it’s absolutely crucial that we celebrate and highlight the importance of talking about all those things at a very early age, so that it becomes a natural part of conversation.”

She feels that schools need to improve in this area, that teachers require more specified training to deliver this curriculum and that it stops merely being assigned to whoever has a free lesson to cover it. But she worries that this is unlikely to happen, she identifies school counselling services as an area needing improvement and says this is why “cuts are so desperate” because it will be one of the first things to get cut, due to not being monitored in the way exam results or attendance is.

In keeping with her nice demeanor, Walker Jones is strongly opposed to war and the Trident programme (“That’s easy,” she replies when asked about it, “scrap it!”) and feels that the £100bn could be used elsewhere.

Perhaps in the rehabilitation and support provided to ex-service personnel. An area where she feels a more statutory approach is required, as opposed to leaving charities to shoulder much of the burden.

Our conversation drew to a close and I found myself impressed by Walker Jones, by her passion, commitment and intelligence.

I only hope that in Cardiff North she doesn’t finish where nice guys tend to.

What would you chose as your entrance music?

“That’s a really tricky one, because I really like all kinds of stuff. I guess when you first started asking the question I was thinking, maybe, of stuff like the traditional Welshy stuff like Hogia’r Wyddfa with ‘Safwn yn y bwlch’.”

She reveals that at the birth of her first son she had “The Arrival of the Queen of Sheba” but confesses that probably isn’t fitting for a non-Royalist. With a variety of musical taste so many to chose from, Walker Jones arrives at a compromise “Maybe a medley?”

“Dafydd Iwan would be good. Bit of Maria Callas perhaps, as well. And definitely some of the Welsh folk songs, because they’re great to walk to, I probably wouldn’t dance in, though”

What book has most shaped your world view or effected you the most?

“City of Joy (by Dominique Lapierre),” she begins, impressed by it’s depiction of the lives of the poor in Calcutta and “how they look after each other”

Although she confesses to not having much time to read fiction, and her other selections are non-fiction, the first The Spirit Level (by Richard Wilkinson and Kate Pickett), she choses because of how it shows “how social inequality correlates with social difficulties. In societies where there isn’t so much social inequality, like Finland, there are fewer social differences” and Nudge (by Richard H Thaler and Cass R Sunstein) which is about “how you can change people’s behaviour in small ways”

Which important British figure would you chose to be on banknotes?

“It wouldn’t be British, they would be Welsh” she replies with a smile. “Either Byddug or Gwenllian…when I was a kid I used to live in Carmarthen and my grandmother lived in Trimsaran, and we used to pass Kidwelly…you’d pass a field called Maes Gwenllian, her head was cut off in battle with the English. She was a heroine, trying to protect her family and her country”

“Hywel Dda would be another one, his laws are amazing. He was really sensible about women as well, he believed women should have equal rights.”

Do you agree with an increased tax on the super rich?

“Yes.” Walker Jones’ response was immediate “I believe in trying to redistribute power and wealth, which is one of our party’s main principles, that an unequal society is not good for anybody.”

Where do you stand on the legalization of cannabis?

“I would decriminalize cannabis, in particular,” Walker Jones began “and think about decriminalizing some of the other drugs. Because it’s not the drug users you need to be penalizing. You need to be providing rehabilitation and support for people to come off drugs.”

“There are medicinal uses, acknowledged medicinal uses, so why should you punish people for using stuff that helps them get through their day when they’re in so much pain?”

Why should people vote? In general, and for you, specifically?

“It’s really important that people use their vote. As a woman, you know, people have died, thrown themselves in front of horses so I could vote, so I absolutely think it’s important to use that vote.”

On the subject of disillusionment, Walker Jones encourages involvement- “If people feel that politics isn’t representative, get involved! Set up your own party!”

“There are 8 candidates in Cardiff North, one of them must reflect your views, to some extent or another”

This wasn’t intended as a pro-Plaid piece, I’ve reached out to all of the candidates for interviews.

For more info on the Plaid policies click here.

Still undecided? Take this quiz to see who you’re most in line with.