I’ve read some of Burroughs stuff before and had a couple of problems with it, but with some of his stuff going cheap on the Kindle I thought I’d check out his most famous creation, Tarzan. 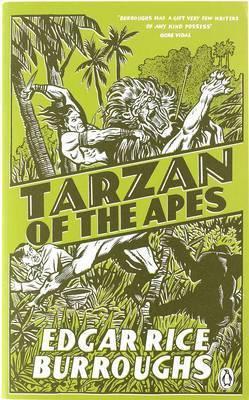 I was pleased with what I found, it’s a rollicking, fun adventure story filled with derring-do, wild animals and jungle peril. All the elements are there- Tarzan swinging through the trees, Jane, fights with dangerous beasts and the wild man struggling with the civilized world.

It’s great fun and moves along at quite a lick, taking us from Tarzan’s infancy right up to him visiting the United States in pursuit of the woman he loves.

It has it’s problems, it’s very much of its time with some woefully chauvinistic undertones and a terrible black servant character who talks like an offensive caricature. For a modern day reader these are groan inducing and almost ruin the whole thing, but Burroughs sticks mainly to the action which keeps you gripped, and there are flashes of understanding and intelligence, such as explaining that the tribe of natives who attack some of the new arrivals have suffered at the hands of Belgian colonists. It’s a minor thing, and doesn’t his own troublesome racial comments, but there is at leas some knowledge that savagery is present in all races, and the sins committed by the “civilized world”.

For the most part, though, I managed to get past this, because they only crop up briefly and for the most part this is lightweight, non-controversial heroics. Tarzan fights other animals for food or to protect others, and ERB seems to have respect for the simple side of nature which differs from the needless death of man’s hunting.

Like John Carter, Tarzan picks up skills with maddening ease, and learns to write all by himself, which feels like a stretch, but ERB needed the character to have some way to overlook it and applying logic and realism to Tarzan is a fool’s errand, it’s far easier to just go with the flow and enjoy a daft, antiquated adventure story.

Kept me engrosses throughout and I blitzed through it in a matter of days and may very well check out Tarzan’s continuing adventures, especially as the ending leaves it open for the character to return.

Verdict: Superior to John Carter’s adventures, this still has some problems for a modern day reader, but there’s no arguing that it’s a fun, entertaining adventure tale and Burroughs writes with verve and a knack for keeping you hooked. Easy to see why the character has endured so well. 7/10.

3 thoughts on “Book Review: Tarzan of the Apes by Edgar Rice Burroughs”