I first became aware of John Green through his vlogs, which I’ve seen clips and gifs of online. In these little clips the dude came across as a decent bloke who showed intelligence, humour and compassion in his responses to his fan’s questions and stuff. Here’s an example of his work:

Having discovered who this random fellow was I looked into him and it turned out he was an author of young adult fiction, impressed by the man himself I thought I’d check out some of his work and this was the book I chose to start off with. 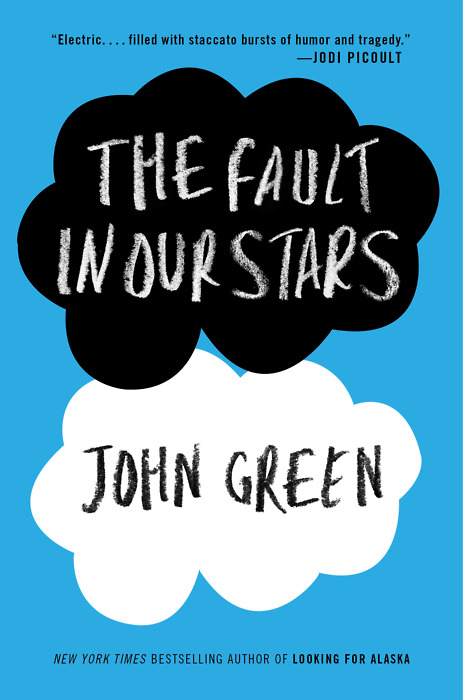 The novel deals with Hazel, a young American girl who has cancer. Despite a new experimental drug having slowed her cancer, she knows she is going out sooner rather than later. Having dropped out of school for treatment, Hazel’s only connections are her parents, an old school friend who she increasingly feels detached from and a support group she attends more at the urging of her parents than from her own desire.

One week at the support group she meets Augustus, a good looking, charismatic and clever young guy. Augustus has suffered from osteosarcoma (bone cancer). They click and a friendship develops which soon begins to become something more intense. However, their relationship faces problems when Hazel discovers that Augustus’ ex had died of cancer and she fears that she is a “grenade” and will only hurt him as she will her family.

They overcome this and travel to Amsterdam in order to meet the reclusive author of Hazel’s favourite book, which doesn’t have a definitive ending. Hazel wants to know what happened to the characters after the book, it having bugged her for years.

Will they find the answers they want? How will their relationship deal with the problems their health throws up and their own personal issues?

I freaking loved this book. Green writes with this great intelligence and wit throughout, I must admit part of me dreaded it as I read synopsis, fearing that I was headed into twee cancer heroism territory. Y’know, the sort of thing you see in TV movies or articles in trashy magazines about angelic patients dealing with their condition with stoicism, grace and courage.

Luckily, Green makes this something far more engaging and seemingly more realistic, largely thanks to his sensational narrator/protagonist Hazel. She’s remarkably clever and extremely introspective, although I suppose faced with your own death you’re going to spend a lot of time thinking. Green fills her narration with a kind of intelligent sadness, in her teens she’s caught between the reality that she will never get to do many things and youthful dreams. There’s a cynicism in her narration, fed up with the patronizing attitudes she encounters, embarrassed by her oxygen tank and grimly aware of the reality of her situation.

That’s not to say she mopes about all the time, having accepted her situation she seems more able to deal with it than her parents or other characters who crop up, and she and several of the other young cancer patients have adopted jet black gallows humour as their defence. While some of the book is heartbreaking in it’s sadness I was frequently laughing at lines or quips made by the characters.

Through Hazel’s narration Green deals with aspects of being a terminal patient I’d never really given much thought to before- the knowledge you are hurting those who love you, and the guilt that your sickness has robbed them of all other aspects of their life. Hazel’s mother seems to be a full time carer, a situation which leaves Hazel with a mix of guilt and irritation- guilt over her mum having nothing else to do and irritation that her mother is constantly hovering around.

The best thing is that he never loses sight of the fact that she is a teenager, she’s irrational and talks without thinking. Green captures the insecurities, anxieties and fears of adolescence which don’t just disappear because of illness.

Green’s writing is very smart, loaded with allusions and philosophy, and at times this lends some of the dialogue a slightly unreal quality. I don’t think many teens talk like Hazel and Augustus do, I definitely don’t remember my friends and I being insightful and witty so consistently, but then again maybe most teens are and my friends and I were just thickos. In a way it reminded me of Dawson’s Creek, which given how much I loved that show is high praise- the dialogue contains realistic touches (pop culture references, awkwardness and silly jokes) but it’s deeper and more thoughtful than normal, like the characters are able to articulate themselves in a way you wish you could.

The plot unfolds at a steady pace, and while a few things I saw coming, there were twists and turns along the way, and it’s an extremely emotional journey for the reader. I had tears in my eyes throughout, thanks to Green’s ability to create romantic, poignant moments which manage to avoid lurching into saccharine sentimentality.

Some may not like the way it frequently dwells on philosophy and Big Ideas, and I admit there were a few moments when I felt it was a tad pretentious, but perhaps that was intentional, showing the intellectual smugness you hope most people grow out of after their teens.

But it’s a moving, well written novel which deals with a serious subject in an open and engaging manner. Hazel is praised in the novel for her keen observations, and that is what makes this book great, the way the narrator notices things- the silence of the houses of the ill, the quiet signals of emotional upheaval and the reality behind the masks people wear.

It’s a lovely book, and I recommend it strongly, but be warned, you will get a bit choked up and teary in places.

Verdict: Green is a sensational writer and handles this story with intelligence and delicacy, finding humour in the darkest moments but also allowing the sadness to be exposed fully. Moving, engaging and a pure delight. 9/10

3 thoughts on “Book Review: The Fault In Our Stars by John Green”