This is a corker of a sci-fi movie, shot for a relatively small budget ($23m according to Wikipedia) with a relatively unknown cast at the time and a wonderfully simple premise. 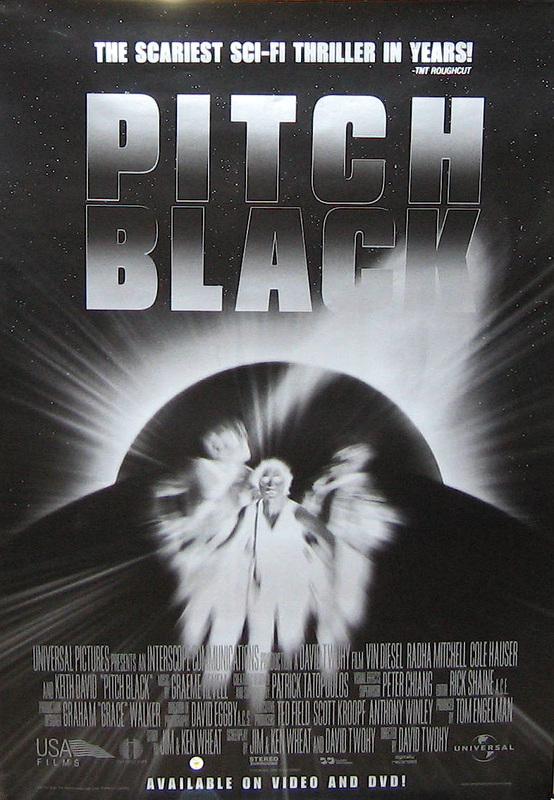 A space ship on a long journey with it’s crew and passengers in stasis is hit by meteors and nosedives towards a nearby planet. With the captain killed during the meteor strike pilot Carolyn Fry (Radha Mitchell) takes the controls and tries to bring the ship down safely. With the ship overladen she wants to jettison the passenger compartment, but her navigator Owens (Simon Burke) stops her by blocking one of the safety doors.

Carolyn brings the ship in for a crash landing, but many of the passengers are killed leaving a small group of survivors. Owens is mortally wounded in the crash and with the first aid cabinet lost in the wreck dies a painful death. The survivors are grateful to Carolyn and make up a rag tag bunch- Muslim Imam (Keith David) is taking three young charges on a pilgrimage, settlers Zeke and Shazza (John Moore and Claudia Black), posh antiquities dealer Paris (Lewis Fitz-Gerald) and teenager Jack (Rhiana Griffith). Also aboard is cop Johns (Cole Hauser) who has in his custody Riddick (Vin Diesel) a notorious and violent criminal.

The gang have problems- they need a way to broadcast a distress signal and to find water, and things get worse when Riddick escapes. The planet they find themselves is a desert and they discover it orbits three suns, meaning that there is no nightfall.

Water is not found, but they discover an abandoned mining facility with an old ship which Carolyn believes she can get running with parts from their ruined ship.

While half the group is away, Zeke who is burying bodies is killed and suspicion falls on Riddick, who warns them that they have more things to fear on the planet. Carolyn investigates a series of caves near Zeke’s death and is attacked by alien creatures. She escapes and they realize the things hate the light.

Consulting the left over info in the facility they discover that something happened 22 years ago and when they move a solar system map they discover that every 22 years an eclipse occurs, with a larger planet blocking the suns and plunging the world into darkness, for what appears to be a considerable length of time.

They leg it back to their ship where they plan to get all the energy cells but the eclipse occurs and thousands of the aliens burst forth. 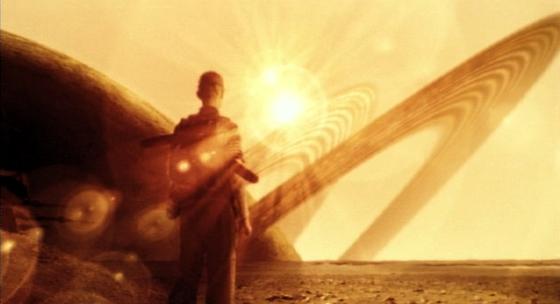 With the group getting picked off they realize they must make a run for their escape ship, using whatever lights they have left to protect themselves and keep the critters at bay. Armed with a dwindling supply of torches, welding equipment, flares and flammable spirits they head off.

Adding to the problems is growing mistrust between Carolyn and Johns, who she discovers is a bounty hunter posing as a cop to make transport easier, and the fact that they must trust Riddick to be their guide, due to him having undergone a surgical procedure while in an underground prison to enable him to see in the dark.

Will Carolyn and Johns be able to keep their secrets from the rest of the group? What other secrets do the survivors hide? Can they pull together to survive? And will their lights last until they get to the ship?

I remember seeing this flick on VHS way back in the day, and being completely blown away by it. I’m a massive sci-fi geek and I loved the idea and the low key way it was executed.

The idea is simple, and anyone who picks “what are the chances” holes is a joyless pedant who should be avoided. The idea of darkness surrounding them means that the filmmakers save a ton by just having us hear and not see the critters as they swarm around, which is a good idea for all low budget filmmakers. It also means that a lot of tension is wrung from the fires guttering out and torch batteries fading.

What I really loved though was the character of Riddick, who ticked a lot of boxes for what a teenage boy would consider badass- he was ripped, spoke with a gravelly voice and was a jaded anti-hero (I also loved Clint Eastwood and Snake Plissken at this point, and still do, and they are clearly Riddick’s forebears).

Vin Diesel was relatively unknown at the time, aside from voice work in The Iron Giant and a supporting role in Saving Private Ryan, but I was deeply impressed with him in this movie and raved about it to all my friends. I predicted he was going to be the next big thing in action cinema and as he followed this up with The Fast and the Furious, it looked as though I was right. That may have not panned out but I’m glad he’s back on top after returning to the Fast series and with Riddick due out soon.

Diesel makes Riddick a total badass with a wolfish smile and sarky one liners, and is aided by the crazy eyes idea. It sounds daft but see earlier comments about “what are the chances” and sometimes you’ve just got to go with it (like ignoring the fact that evolving to be hurt by light on a planet where it’s only dark every 22 years is ridiculous). The badass is built up by having him sneak around the place like some kind of slap-headed ninja, appearing fleetingly in the background or shown to be ridiculously close to other characters, and his penchant for knives. I remember thinking at 16 that the scene where he shaves with a knife and engine grease was one of the coolest things ever. 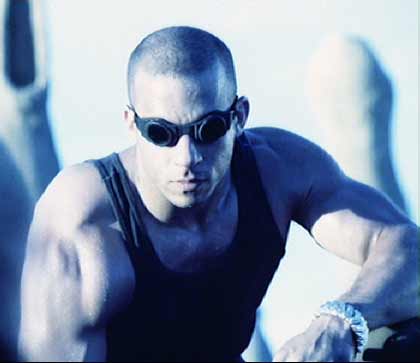 It’s Diesel’s film and he steals the show, but credit should also go to Hauser and Mitchell, who do well in their parts. Hauser is a big bloke so he looks like he could hold his own in a scrap, but his real gift is this dead eyed look which makes his “screw everyone else to survive” attitude and he does a good job of slowly letting the character’s scummier side rise to the surface, all traces of charm being chipped away until a ruthless, selfish bastard remains. He’s a cracking villain.

Mitchell does well as the guilt ridden pilot and is rather tough, taking charge of the situation and controlling her fear of Riddick and the monsters.

The rest of the cast are pretty much all cannon fodder although genre favourite Keith David does the business as usual and Rhiana Griffith is quite good in the role of Jack even though the “she’s a girl” twist is so obvious even the blind aliens could see it coming.

It’s a shame that Claudia Black buys the farm early on as I’m a massive fan of hers thanks to Farscape.

David Twohy directs it in taught, relentless fashion, keeping the action and tension running throughout while still managing to let his characters breathe a little bit in between. The script is terse and no frills but there are a couple of good lines (“How much do you weigh now, Carolyn?”).

It’s basically a brilliant example of a genre film done in a low budget, no nonsense way and an extremely gripping sci-fi thriller with some nice touches and in Riddick, an enduring cinematic badass. I’m totally stoked about the upcoming film and despite initially being disappointed with the at times ludicrous Chronicles of Riddick, I must admit it’s not as bad as I remember and alright fare, still, here’s hoping Riddick’s third outing is closer to his first in style and execution.

One thought on “My Favourite Films 23: Pitch Black”