I loved the Ghost Busters even before I saw the movie thanks to the cartoon series The Real Ghostbusters, which as a kid was one of my favourites.

Seriously, I loved that show. I got Ecto 1 for Christmas one year and playing with it during the morning service is one of my clearest childhood memories (we used to open one gift before church and take it with us to church, my parents probably should have thought this one through more as it had a siren) and I think my Dad made me a ghost catching trap out of a tissue box or something. Winston was my favourite character in the cartoon and part of the list of heroes who made me respond to the “what do you want to be when you grow up?” question with “Black”.

I was also incredibly jealous of my best friend at the time, Dai, because he had the fire house toy thing which 1991 Chris probably would have killed for.

I can’t remember when I saw the film for the first time, I think I was quite young but my memories are hazy and most of it probably went over my head, and it was years before I saw it again in my teens.

As a teen I fell in love with the movie, it may have been very different from what I could remember from my childhood cartoon viewing, but the movie was brilliant in a different way. Mostly down to one thing-

They might be a ghost fighting team, but Murray is undeniably the star and nicks the entire movie, he gets almost all the best lines and his funny, irreverant if slightly sleazy Peter Venkman is a delight. He’s described as being “like a game show host” by another character, but he’s far cooler than that, and Murray’s sarky, charismatic performance is like a masterclass in comic performance.

Unlike his colleagues Ray and Egon (Dan Aykroyd and Harold Ramis respectively), he doesn’t seem to be someone who’s dedicated to science, just a smart guy who’s fallen into the job and messes about in it. When they discover that ghosts are real and how to trap them you can see the lightbulb going off as he figures out they can make money off it even before the university fires them.

Soon the three hopelessly clueless and out of their depth ectoplasmic exterminators are in business, their first case is a great chaotic sequence as they take on familiar face Slimer, and there are great moments throughout this bit, especially the awkward backing up in the lift when they turn on their nuclear powered gear for the first time and the glee they have in smashing up a fancy hotel dining room (“The flowers are still standing!” is a personal favourite moment and something I really want to do sometime).

Venkman is smitten with one of their first clients, Dana (Sigourney Weaver) and his attempts to chat her up are a good mix of overconfidence and jokey humour. When they discover how serious things are at her building they face a massive challenge, exacerbated by a petty, interfering bureaucrat. The trio, with new member Winston (Ernie Hudson) must face an ancient foe which leads to a show down with a giant marshmallow sailor.

The film is distinctly 80s, but that’s not a bad thing, because let’s face it in terms of fun, crowd pleasing flicks, the 80s had a pretty high success rate, and quite a few still stand up, and this flick definitely does.

The script, written by Aykroyd and Ramis is loaded with quality lines and nice little touches and it’s one of those movies that I can quote quite a bit of. There’s a goofy streak of humour throughout and some wonderfully crafted gags and moments.

The ghost aspect is handled well and the plot is simple, but well done. There’s humour in the way they tackle the ghosts, but the film gets one thing right- it makes jokes with the ghosts and nasties, but never makes them the joke. Once you start mocking your critters the whole exercise falls apart, and any threat evaporates. That’s not to say it’s a creepy flick, because it’s all rather too goofy to scare, which is fair enough as it’s definitely a comedy first and a supernatural flick second.

The effects may have dated, but due to their 80s simplicity there’s something engaging about them and the design gives the critters a real sense of character, which later, slicker CG effects often struggle to achieve.

But the writers deserve a lot of respect for not hogging the limelight, despite being skilled performers in their own right and letting Murray really let loose as the lead.

The cast are great across the board, with Aykroyd making Ray the likable, dopey heart of the unit and an underused Hudson doing quite well as Winston, the last to join the team who is thrown into a world he knows nothing about, and copes with it remarkably well. He’s the regular blue collar guy and balances out the other characters’ brainy side, and his street smarts means that he actually talks more sense than the others at times.

The best thing is the chemistry they all share, with all four playing off each other brilliantly and all getting some great lines along the way. It’s a very solid, well done comic ensemble.

As the female lead Sigourney Weaver is delightful, she’s strikingly beautiful which explains why Venkman falls for her and also does a great job in her scenes with Murray, showing a real knack for comedy, which at the time was something she wasn’t known for. Weaver also seems to be having fun in the role, especially when she plays the weirdly sexy possessed Dana. 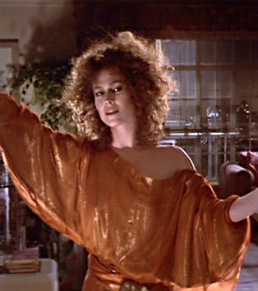 But it all comes back to Murray, and he’s why I’d recommend everyone check this flick out. He’s sensationally, laugh-out-loud funny and his deadpan, slobby Venkman is one of the best comedy characters of all time.

One thought on “My Favourite Films #12: Ghost Busters”