Die Hard is a classic movie, and was the blueprint for a dozen knock offs (in a stadium- Sudden Death, on a boat- Under Siege, on a plane- Passenger 57, on a mountain- Cliffhanger). It’s premise was simple, New York cop John McClane (Bruce Willis) is caught in a skyscraper with a gang of dodgy Euro terrorists/criminals and has to take them out and stop them pulling off a massive heist. 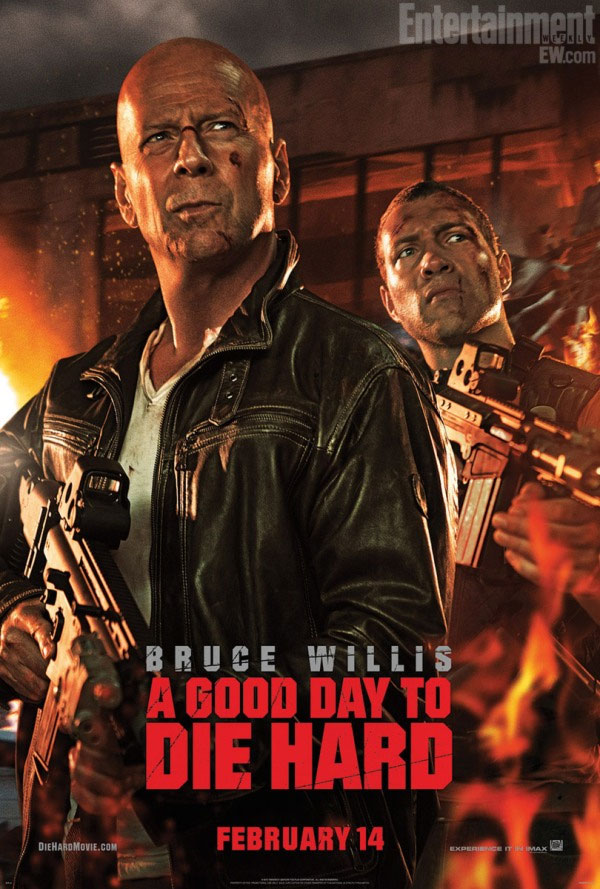 Over a series of sequels the scope of the threat gradually expanded- a whole airport in 2, all of New York in 3 and the entire US in 4. All have been successful, largely down to Willis’ wisecracking and resourceful copper. He’s a loudmouth who’s always the underdog but never  backs down, and he’s usually out of his comfort zone.

In this the 5th installment the scope is bigger again and McClane is even further out of his depth as he travels to Russia to see if he can get his estranged son, Jack (Jai Courteney) out of some trouble with the local law. When he gets to Moscow he discovers that Jack is in fact a CIA agent on a mission to keep a dodgy Russian safe. Kumarov (Sebastian Koch), said dodgy Russian has apparently reformed in prison and knows the location of a file which will ruin corrupt politician Chagarin (Sergey Kolesnikov), who the US want to stop getting to power.

Chagarin is trying to eliminate Kumarov when McClane collides with his son and gets sucked into keeping him safe from Chagarin’s goons, led by Alik (Rasha Bukvic), a crazed mercenary. Can McClane and son keep him safe and get the file back? Who can they trust, and can they rebuild their tattered relationship?

Here’s the thing about this movie, it was never going to match the original, which as I said, is a classic but I was in no way ready for the disappointment it turned out to be.

It may not have pleased everyone, but I rather enjoyed number 4, which saw Willis being teamed with a geeky sidekick and ramped up the scale with a string of ludicrous OTT set pieces and a great villain, at times it creaked a little and there was a little too much CGI for my tastes as I like my stunts old school, but on the whole it was quite good fun.

But 5 doesn’t even match that, with there being far too much computer imagery and the ridiculous aspects even more outlandish. With each installment the series has moved away from it’s roots as a fairly low-key actioner.

It ditches the traditional Die Hard motif of McClane being caught in the wrong place at the wrong time by having him actually go after danger and gives him a partner who’s actually up to the challenge, which makes a change but doesn’t quite work as Courtney makes Willis look older.

Courtney however is one of the film’s strengths as he and Willis share fairly decent chemistry and he looks the part as the tough guy junior McClane.

Willis is his usual grinning, wisecracking self and as likable as ever, if not quite given as good a script as in previous episodes.

But there’s little else to recommend the flick, the charismatic villain Alik is underused and a little too cartoony at times.

With the heavy use of computer effects the only real standout sequence is a rather impressive car chase through the Russian capital, which was rather awesome but other than that there are too many missed opportunities, including a hulking henchman who you’d imagine was being included for a big one-on-one scrap with at least one of the McClanes but this never materializes and there’s no real dramatic showdown to cap the movie.

The whole movie carries this feeling of opportunities missed, and it just feels flat and a bit by the numbers..

There have been suggestions that the series may continue with Courtney’s character as the lead in a sort of Son of Die Hard way, but personally I’d much rather see McClane return for one last round, but with the excess reined in and a return to the more claustrophobic, no frills vibe of the original.

Verdict: A rather disappointing addition to the series, with it seeming to just go through the motions and even Willis unable to elevate it above mediocrity. Jai Courtney is good but all in all it falls flat. 5/10.