WARNING! I’ve done my best to avoid spoilers, but some plot points will be revealed during this review, so if you want to see the movie completely fresh don’t read any further.

And I’m a sucker for sweet romantic stories.

So, yeah, this film was always going to work for me. 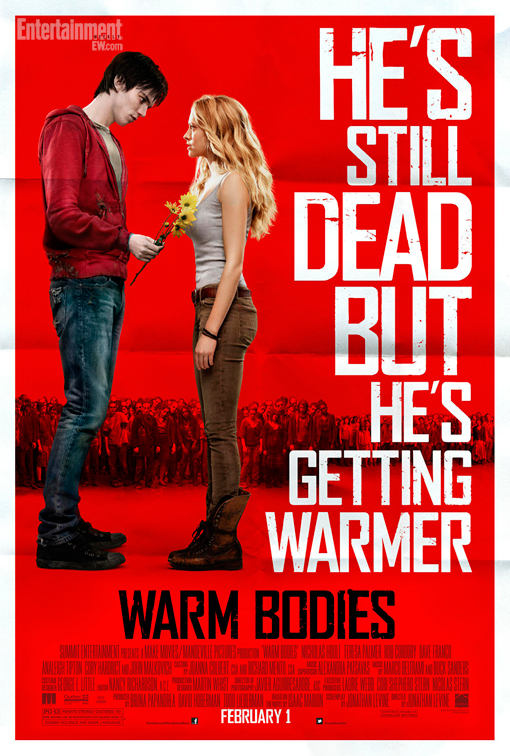 Set a few years after a zombie outbreak where the humans are holed up in a small walled section of the city the film focuses on R (Nicholas Hoult), one of the infected. While he might shuffle about and eat the flesh of the living R is a rather high functioning zombie, almost being able to talk, he has dim memories of his life before the catastrophe and collects bits and bobs which he hoards. As our narrator we get to see within the mind of a zombie, as his memories start to fade.

While the zombies shuffle around seeming loosely connected to their old lives and memories, some eventually lose all shred of humanity and become “bonies” skeletal and more vicious zombies.

R’s life (death? undeath?) changes when he meets one of the human survivors, Julie (Teresa Palmer). Seeing her sparks feelings inside him and R protects her and takes her in. Julie wants to go back to the humans, but R tries to convince her to stay with him. As they spend time together R appears to become increasingly human, being able to talk more and more, while Julie finds herself slowly warming to her undead admirer.

Julie is discovered, but seeing her and R together appears to fire something within the other zombies as well, and they begin to change too. However, the changes in the zombies draw the attention of the bonies, who had previously left them alone.

R and Julie however face a problem when he reveals that he was responsible for the death of her boyfriend, and they split. However, R realizes that he and Julie are at risk from the bonies and are changing things and tries to get to her. Can they be reunited, are R and the other zombies healing themselves? And can they convince Julie’s gung-ho, zombie-hating father Grigio (John Malkovich) that the zombies don’t need to be gunned down.

The zom-com genre has thrown up some good films over the last few years, and so Warm Bodies was always facing an uphill struggle in trying to compete with Shaun of the Dead and Zombieland. But it’s still a good film, and works well because the tone is different from those other films, this is in some ways a rather sweet fairytale romance, just one filled with the rotting corpses of the undead.

One of the neatest tricks is having the film being told from the perspective of one of the zombies, with R’s interior monologue getting some massive laughs and allowing the film to show awareness of the genre conventions (complaining about being slow and explaining why they move around in groups). We get to hear his worries about what he’s doing and his fears of losing all the remaining scraps of his humanity. He may eat brains but as he himself says: “at least I’m conflicted about it”, and it’s interesting take to have the zombies being shown as slowly becoming ghouls rather than a switch being flicked.

Hoult is superb in the role, really nailing the zombie body language while also keeping traces of human behaviour in there, with R’s hunched, classic teenager mopeyness. As the film progresses he does a good job of slowly allowing these human aspects back in, piece by piece whether it’s stumbling for words or his facial expressions. Hoult makes his expressions slow and faltering, like somebody who can’t quite remember how to smile.

It’s this that makes R such an endearing protagonist and makes the central romance work, despite the fact there’s a bit of a grey area because R ate Julie’s boyfriend Perry’s (Dave Franco) brain, enabling him to see his memories (a great addition to the film, with the brains being regarded by R as the best bit because the memory upload is as close to dreaming as the undead get), are his feelings all of his own, or have they been merged with Perry’s? I see them as R’s own feelings as he’s clearly captivated before he chows down on his love rival.

R’s awkward attempts to comfort and interact with Julie are extremely sweet, and there’s a great moment where R’s interior monologue seems to echo the feelings of every teenage boy who’s ever been around the object of his affection, repeating “Don’t be creepy” to himself. These fumbling attempts make it more believable that Julie would slowly start to warm to him.

This change in Julie is done rather well, and the role is performed well by Palmer, who does a great job in mixing the character’s tough survivalist skills with a kind of sweet fragility, despite the horrors around her Julie has managed to retain her human side and as her revulsion and shock at R starts to ebb away she treats him with kindness and warmth. It might be an outlandish premise, but their relationship is handled with real sensitivity and a natural feeling, with the feelings slowly developing between them and the way they act altering as the story progresses.

The idea of humanity being lost is the recurring theme in the film, whether it’s the bonies finally giving up on everything or the way the zombies start to heal, it rings through. We’re shown it in Perry’s memories too, as the initially sweet and laid back guy slowly becomes increasingly cold and closed off due to what he witnesses. Franco may only have a few scenes, but he does a brilliant job of conveying the character’s spirit being broken down and the changes in his outlook on things, similar to how war must affect a soldier’s mental state.

Aside from the leads the rest of the cast handle their roles well, especially Analeigh Tipton as Julie’s friend Nora, Tipton impressed me in Crazy, Stupid, Love and is again wonderful here as the slightly dippy, kind hearted best friend who also has a nice line in sarky comments. Her response to R is fantastic and she and Palmer share chemistry that makes their friendship seem convincing.

Also worth mentioning is Rob Corddry as R’s zombie mate M, who does a brilliant job conveying his own emerging humanity and has fantastic comic timing and chemistry with Hoult. Malkovich is hardly stretched as the gung-ho commander, but there’s enough in the performance to hint that he genuinely cares for his daughter under his gruff, cold exterior.

One of the movies best aspects is the use of music, it’s one of the ways R maintains his humanity and it’s also how he and Julie start to connect, in a scene where the characters act like normal teenagers and the chaos and horror of the outside world seem to be forgotten. There’s a bit of a tongue in cheek use of cheesy power ballads, but some of the songs are brilliant and there’s one instance where a song is used to get two separate laughs, the first from the juxtaposition and the second from a character making reference to the music.

All in all this is an extremely well crafted romantic fantasy, with some nice touches and solid performances from the leads. It might be a bit to sweet and slushy for some, but for a soft git like me it really hit the mark and I can overlook the fact it stints on the gore compared to other zomcoms, but I guess in a way the blood might have muddled the tone and as such it’ll probably work as a good Valentine’s Day movie, even for the squeamish.

Verdict: A wonderfully sweet and charming romantic comedy with some good gags, and a brilliant performance from Hoult as the lead. It has plenty of laughs and there are some great ideas in the movie too. 8/10