This is one of those movies that’s probably in my definitive top 10 films list, and one I can quote quite a bit from. Yet despite how much I love it I always seem to forget just how good it is, meaning that whenever I rewatch it I’m always impressed. 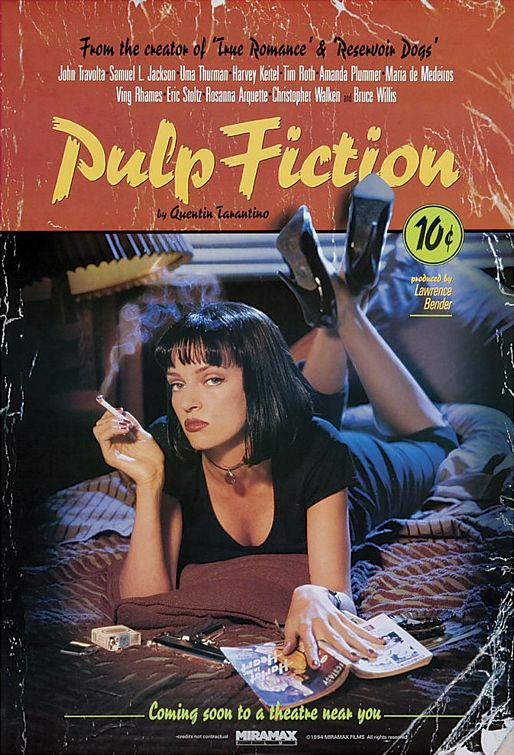 It’s the second movie Quentin Tarantino directed and it’s probably his most famous and arguably his best (Reservoir Dogs runs it pretty close), it’s a darkly comic modern noir featuring a series of interlocking stories over the course of a few days in LA.

Kicking off with criminal lovers Pumpkin (Tim Roth) and Honey Bunny (Amanda Plummer) holding up a diner it then switches focus to verbose hitmen Jules and Vincent (Samuel L Jackson and John Travolta respectively), who are running an errand to collect a mysterious briefcase belonging to their boss Marsellus Wallace (Ving Rhames).

Vincent has been charged with taking Marsellus’ wife Mia (Uma Thurman) out for the evening while her husband is out of town. The two hit it off and share sexual chemistry, something Vincent is weary of, having heard rumours of how jealous Marsellus is. Things take a turn for the worse as the evening progresses.

The second plot strand is about boxer Butch (Bruce Willis) who is ordered by Marsellus to take a dive, however, unable to reconcile this with his instincts Butch not only wins his bout but kills his opponent in the ring. Fleeing he plans to get away with his girlfriend, Fabienne (Maria de Medeiros), but has to return to his house to recover a gold watch given to him by his late father. As he attempts to leave he runs into Marsellus and after a chase the two end up in trouble together.

The last strand is Jules’ who following what he views as a miracle is reassessing his life and must deal with a skeptical Vincent and an accidental shooting that needs covering up with the help of the suave fixer, the Wolf (Harvey Keitel).

That quick synopsis doesn’t do justice to the movie and the many great touches that are included in Tarantino’s script. Along the way there are flashbacks, diversions and bizarre supporting characters and for first time viewers the film is loaded with clever, unpredictable twists and turns. It may have it’s roots in noirish conventions but Tarantino takes it in new directions.

His script, infinitely quotable is a delight, blending rapid fire pop culture references with profanity strewn philosophy from it’s cast of criminals and low lives. There’s also a delightful vein of jet black humour running throughout and for a film that’s drenched in blood and features tons of dark twists the abiding memory I have of it is as a charming, funny crime flick.

One of the criticisms often leveled at Tarantino is that he’s all style over substance, and while that may be true of some of his later work, in this film he does make decent characters.

There’s the likable if slightly hotheaded and foolish Vincent, sultry Mia and the tough headed Butch, driven not merely by self interest as he also exhibits signs that he’s governed by a kind of moral code.

But the best is Jules, played with blistering intensity and bags of badass cool by Samuel L Jackson, in the role that really catapulted him into the limelight and created the SLJ persona we know and love. Jules is a suave, fast talking and intelligent hitman and over the course of the film shows an introspective side as he re-evaluates his life and job. It’s often remembered for his barnstorming Biblical tirade, but for me Jackson’s finest work comes in the quieter moments like when he bickers with Vincent and talks his way out of a tense standoff.

One of the best things in the flick is the double act that Jackson has with Travolta, who like several of the cast is on career best form here. The hot headed and not-too-bright Vincent and Jules contrast each other nicely but there’s a sense of some affection and professional respect throughout, even when things start to go South for them.

The rest of the cast are phenomenal, years before The Sixth Sense Bruce Willis shows he’s far more than just an action hero with his conflicted, tight lipped performance as Butch. This is the best performance I’ve seen from Uma Thurman as well, and she oozes sexuality as the quirky gangster’s moll and she shares wonderful chemistry with Travolta and they spark off each other magnificently.

And Christopher Walken’s brief cameo in the film is sensational, making the most of his one speech to make it a memorable, magnetic moment.

All the cast are at the top of their game, and clearly enjoying sinking their teeth into some of Tarantino’s best dialogue, with the only real misstep being from Tarantino himself, but it seems churlish to criticize when he’s handling the writing and directing so well.

It’s a slick, polished movie with characters and storylines that engage you and a script which delivers a plethora of great moments, it’s rightly regarded as a classic and a much-loved movie by fans and critics.

If you’ve not seen it, check it out.