Okay, first of all if you haven’t seen this movie go order it on Amazon or log off, get your ass to the local DVD retailer and pick up a copy because it is hands down one of the best movies ever made.

The plot is wonderfully simple, shark eats people, people go after shark. But under that you have a masterclass in creating suspense from Steven Spielberg.

Ex-New Yorker Brody (Roy Scheider) is the new Chief of Police on Amity Island, a small community making money from tourism, trying to build a new life for his family, and still feels like an outsider, a situation made worse by his aversion to going into the sea which makes him unusual and draws ridicule from the locals.

A missing girl’s remains wash up on the beach and the local ME states it may be a shark attack. Brody plans to close the beaches, but the Mayor (Murray Hamilton) is opposed to this, arguing that a panic over a shark attack will severely damage the town’s vital summer tourist trade and influences the ME to change his verdict to a boat accident.

There is a second attack when a young boy is eaten within sight of the crowded beach, and the grieving mother posts a $3,000 reward for whoever kills the shark. Local shark hunter Quint (Robert Shaw) disrupts a town meeting and states that he values his life at more than $3,000 and says he’ll kill it for $10,ooo.

The cash reward kickstarts a frenzy of ill-equipped fishermen going out to find it, and marine biologist Hooper (Richard Dreyfuss) arrives to examine the body, determining that it is definitely a shark attack. A tiger shark is bought in but Hooper believes it is the wrong shark, and the angry mother slaps Brody having discovered that he knew there was a shark in the area.

Hooper and Brody bond and break in to view the shark, which they discover was not the right one.

On the July 4th weekend a prank causes panic and the shark attacks again, injurying Brody’s son in the process. 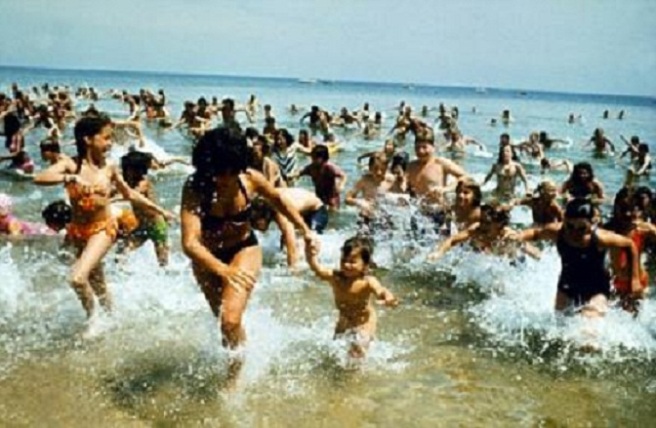 Hooper and Brody join the hard drinking Quint aboard his boat and head out, attempting to catch the shark. They discover it’s bigger than expected and try to bring it in, using harpoons and barrels to draw it up.

They slowly start to form a bond with each other, including a great scene where Hooper and Quint compare scars, and Quint explains some of his past.

The shark then attacks, damaging the boat and Hooper goes down in a shark cage, but the cage is sunk and Quint killed leaving Brody alone to face the shark with just a rifle and Hooper’s oxygen tanks. With the shark vanquished Hooper and Brody swim in for the shore.

Here’s how good this movie is- you can’t see it and ever be fully comfortable in the ocean again. I’ve been splashing about off the coast of Sri Lanka, happy as Larry when suddenly John Williams’ iconic soundtrack popped into my head and I decided I’d left something on the beach. That’s a big impact to have, the only film that rivals it is The Birds.

Spielberg does a great job of not showing us too much, its all done in glimpses of a fin or a brief flash of the shark as it chomps down on someone. And it uses one of the scariest things about sharks that they can strike without warning from an entirely calm sea, and then vanish completely again.

Its a wonderfully shot movie and the pacing is perfect, this is when Spielberg first showed that he was the master of making blockbusters.

And, just like his later successes its down largely to the fact that the characters never get lost in the action, and you warm to them.

There’s Brody, harassed and world weary he’s come to Amity for the quiet life and yet is thrown into a nightmare, and forced to confront one of his major fears. Roy Scheider does a brilliant job as the frustrated cop who finds himself at odds with the new community and forced to make decisions he doesn’t want to by the shortsighted Mayor.

The scene where the mother slaps him is heartbreaking and you feel for the guy, and the scenes with his family and his friendship with Hooper have genuine warmth.

Richard Dreyfuss is likable as Hooper, serving to teach us about sharks but in a way that suggests the character has genuine passion for his subject and he has some great funny moments, especially in his clashes with the old-school macho Quint, and a kind of clash between the old fashioned working class America and the emerging educated middle class Americans born after WWII, Hooper is the only middle class character in the film who’s likable, the rest being the weak willed ME or the slimy mayor. And in the end he proves useful and wins over the hostile Quint.

Rounding off the trio is the scene stealing Robert Shaw as the salty Quint, all old fashioned grit and toughness. His first appearance is pretty badass and Shaw really sinks his teeth into the role.

He’s also given one of the greatest speeches of all time, which serves to cap a fantastic scene where Hooper and Quint bond by comparing scars and Brody looks at his but doesn’t share, which hints there may be a reason the Chief doesn’t go in the water.

This scene is just one of the film’s amazing moments, and it is loaded with them.

Oh, and there’s John Williams’ theme, which is at once wonderfully simple and immensely powerful, a totally iconic piece of music and one of the best movie soundtracks of all time.

One thought on “My Favourite Films #9: Jaws”