Okay, its the customary apology/ass covering time. I realize that breast cancer and cancer in general is a sensitive subject and I don’t intend to cause any upset or offence with what I’ve written and I apologize if any is caused.

I’ve been wanting to right about breast cancer awareness for a while now, because I saw something a few weeks back that I thought was worthy of mentioning, however, other stuff has distracted me and it was only when another breast cancer story came along that I decided I’d actually sit down to write this.

Here’s the thing, I get that breast cancer is a terrible disease to get. I can only imagine the severe distress being diagnosed with it must bring and the trials of the treatment which will follow. I appreciate that for many women its a condition that is awkward or embarrassing to discuss, and that there can often be an urge to bury their head in the sand, in a “what I don’t know can’t hurt me” kind of way.

Firstly, let me just say don’t do this, ladies. I get that no one wants to have their bits prodded by a stranger, but if it was me, I’d want to know, I think the constant doubts and worries would mess with my head a whole lot more than the actual condition in some ways. I know that it must be embarrassing to have to show your breasts to someone you don’t know well (believe me, I keep my mannaries under wraps as much as possible) but these are medical professionals, and their first priority and thought will be about your health and not “what a cracking pair!”

I also understand that there must be a great fear in women of the possible consequences and a concern about losing something which is so intrinsically linked to femininity, in the same way that I think all men fear that losing a testicle will somehow make them less of a man. It won’t. Liking Twilight definitely does though.

And this brings me to my dilemma regarding breast cancer awareness.

Of course I can see the benefits to it and am a massive supporter of it, because, as the saying goes, forewarned is forearmed. Women, and men, but more on that later, should know what to look out for and that at the same time further knowledge of the condition might lead to a reduction in embarrassment in seeking treatment. It’ll never go away completely because of the way breasts have been sexualised in our society, but hopefully it can be lessened and help more women receive treatment sooner.

And just for good measure, here’s a guide of how to check yourself out: 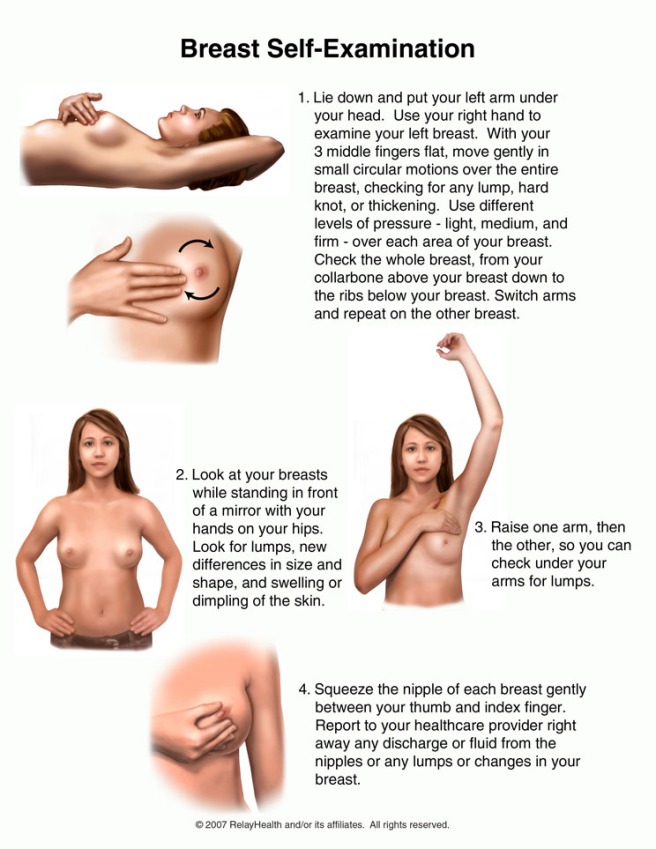 However, I can’t help feeling that in the awareness stakes breast cancer is pretty well known compared to other forms of the disease. I realize it effects large numbers of women every year, but perhaps the focus should be spread out more towards the other forms too.

For example, when I was at uni they had breast cancer nights, where you got a pound of entry if you wore an item of pink clothing and money was raised for breast cancer charities. It was a good idea, and one of several charities that benefited from my drinking. However, as far as I can remember breast cancer was the only cancer that regularly had its own nights.

I also remember that they put cherry Lambrini on offer for one of them because it was pink and it proved that nobody can drink that stuff in a masculine fashion. I also drunkenly discussed the self examination with a female friend and offered, in probably a sleazier way than I care to remember, to assist her in checking if she was okay.

But that’s just me.

Anyway, the reason I wanted to write originally was because while reading a comic the other week I stumbled across Marvel’s full page advert to raise awareness of male breast cancer. The story features two of Earth’s mightiest heroes, Captain America and Iron Man discussing the fact that Tony Stark has been distracted due to his concerns regarding his recent tests for breast cancer. Its a fairly basic one page ad but I think Marvel should be applauded for their efforts in raising awareness of the fact it occurs in men.

Being a guy who gets cancer must be quite tough, as it is something usually connected with women (of the 50,000 people diagnosed every year in the UK less than 400 are men, although you have to wonder how many guys don’t even bother checking themselves) and there’s still a high level of ignorance regarding male breast cancer, I mean, if Tony Stark doesn’t know about your average Joe probably doesn’t either.

As a man who has quite an impressive set of mannaries I can appreciate that you don’t want to draw any more attention to them and that they do make you feel a bit less manly. But that’s just me and my insecurities. I think people need to realize that breast cancer is nothing to do with gender and just a form of cancer that develops in the tissues that make up male and female chests. The thing is, in a way, while the term “breast” is anatomically correct it does bring with it connotations of women.

Marvel’s stance on breast cancer extends to female sufferers too, and they joined with DC in launching a campaign that encouraged self checking and featured four characters performing self checks, including She Hulk:

She Hulk was joined by Storm, Wonder Woman and Catwoman.

Now, I appreciate that breast cancer is unrelated to breast size, but surely if you’re going to use superheroines you’d, ahem, break out the big guns and go with Power Girl?

Anyway, I don’t mean to trivialize the issue although that is what a breast cancer ad campaign in Chile is being accused of doing. Its recent video, “Por Amos a las Tetas” (roughly translated as “for the love of boobs”) has come under fire, here’s the vid:

Some people have said that the video is sexist and pointless and despite its message to men of “if we like them so much we should take care of them” its been dismissed by many, saying that while men might, um, “enjoy” the video they’re unlikely to give any further thought to breast cancer. Which might be a fair point but at the same time, the video has got people talking about it and might work on some men as it might make them raise the issue with their partner.

So, while its an odd tactic to use I think its different and it has already raised awareness. And no, I’m not just supporting it because I quite liked watching it.