I have two new sporting heroes from the NFL now, Baltimore Ravens linebacker Brendon Ayanbadejo and Chris Kluwe of the Minnesota Vikings. Neither because of on-field exploits (I don’t have Sky so its unlikely that I’ll see any American football this season, apart from the Superbowl, which is a drag) but rather for their off-field efforts in using their position in the public eye to push for equality and voice support for the gay rights movement in the USA.

Ayanbadejo is apparently quite an outspoken advocate for marriage equality (a term which always makes me wonder how its opponents can think they have the moral high ground when they’re opposing equality? And before anyone tries to play some ridiculous “do you support BLANK?” I’m supporting any relationship between two consenting adults that provides them with happiness and doesn’t harm others). Ayanbadejo has been involved and talking about things because in Maryland, Baltimore’s state gay marriage has been legalized although does face a vote in November.

Here’s a clip of the man explaining why he supports the movement:

Anyway, Ayanbadejo’s comments and support drew the attention of local politician Emmett C Burns, a delegate in the state’s house (I don’t exactly know what that is, I’m guessing it’s like our county councils over here, only, you know each state can set different rules on stuff) who is against gay marriage. Burns wrote to the owner of the Baltimore Ravens in a letter which has since become public.

In the letter Burns states that he finds it “inconceivable” that Ayanbadejo would support same-sex marriage and voices that he is “appalled and aghast” about the player getting involved in the issue. He then calls on Steven Bisciotti to “take the necessary action” and “inhibit such expressions from your employees and that he be ordered to cease and desist such injurious actions”.

Okay, now at the start he just seems like a bit of a tool, but that last quote, that’s definitely not on. He’s essentially calling on someone to stifle and restrict their employees’ right to freedom of speech.

After the letter went public, Burns who had stated that he knew of no other NFL player who was doing what was Ayanbadejo was doing, received an open letter from Chris Kluwe, the punter for the Minnesota Vikings. 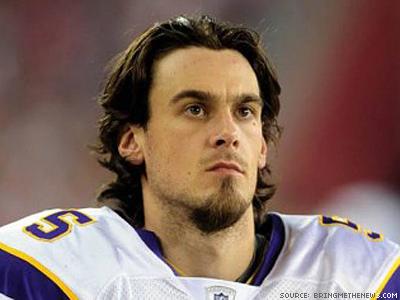 Now, I wasn’t aware of Kluwe before this story (punters aren’t the most important of players) but following this, I would happily buy a Vikings shirt with his name on, as his response is a work of genius.

Going on the offensive from the off Kluwe blasted Burns stating-

I find it inconceivable that you are an elected official of Maryland’s state government. Your vitriolic hatred and bigotry make me ashamed and disgusted to think that you are in any way responsible for shaping policy at any level.

Kluwe then goes on to highlight how Burns is intending to violate Ayanbadejo’s right to free speech, which is protected by the Constitution as well as attacking Burns’ statement that Ayanbadejo should “concentrate on football” and keep out of the debate, citing the desegregation of pro-football:

As recently as 1962 the NFL still had segregation, which was only done away with by brave athletes and coaches daring to speak their mind and do the right thing, and you’re going to say that political views have “no place in a sport”?

And then Kluwe gets down to his final point, his inability to understand why Burns is so anti-gay marriage. He outlines this in his third point:

Its a wonderful letter, witty and well reasoned, and written with a natural verve (Kluwe leaves in some swear words, expressing himself in his own terms) and I recommend you check out the whole thing. Kluwe touches on something I’ve never understood about why people are so against gay marriage as though it will somehow lead to the entire erosion of civilization and destroy society. If you’re straight how does gay people being allowed to marry effect your life (aside from there being twice as many stag dos to go to?).

Just let them get on with it, its not harming you in any way and why would you want to deprive someone of the rights that as a straight person you take as a given?

Incidentally, how cool a potential band name is “Lustful Cockmonster”?

You know what having these rights will make gays? Full-fledged American citizens just like everyone else, with the freedom to pursue happiness and all that entails. Do the civil-rights struggles of the past 200 years mean absolutely nothing to you?

Well done to Chris Kluwe, for a great letter and for fighting his corner and standing up for equality and what he believes in. Kluwe and Ayanbadejo go some way to negating the stereotype of professional athletes being overpaid idiots who have no connection with the real world and are largely stupid. Both of them have shown eloquence and courage in voicing these beliefs, and I feel both should be applauded for this. I will now have a bit of a soft spot for both the Vikings and the Ravens, especially as the Ravens have announced their support of their player’s right to express his belief.